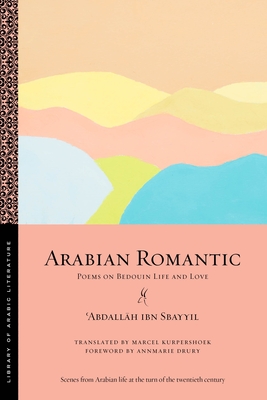 By ʿabdallah Ibn Sbayyil, Marcel Kurpershoek (Translator), Annmarie Drury (Foreword by)
$15.00
ON HAND in at least ONE of our stores. Click through or call for up-to-the-minute availability.

This is book number 69 in the Library of Arabic Literature series.

Scenes from Arabian life at the turn of the twentieth century

Arabian Romantic captures what it was like to live in central Arabia before the imposition of austere norms by the Wahhabi authorities in the early twentieth century: tales of robbery and hot pursuit; perilous desert crossings; scenes of exhaustion and chaos when water is raised from deep wells under harsh conditions; the distress of wounded and worn-out animals on the brink of perdition; once proud warriors who are at the mercy of their enemy on the field of battle. Such images lend poignancy to the suffering of the poet's love-stricken heart, while also painting a vivid portrait of typical Bedouin life. Ibn Sbayyil, a town dweller from the Najd region of the Arabian Peninsula, was a key figure in the Nabaṭī poetic tradition. His poetry, which is still recited today, broke with the artifice of the preceding generation by combining inherited idiom and original touches reflecting his environment. Translated into English for the first time by Marcel Kurpershoek, Arabian Romantic will delight readers with a poetry that is direct, fluent, and expressive, and that has entertained Arabic speakers for over a century. An English-only edition.

ʿAbdallāh ibn Sbayyil (Author) ʿAbdallāh ibn Sbayyil (d. 1352/1933) was a poet from the High Najd region in Central Arabia, in what is now Saudi Arabia. Annmarie Drury (Foreword by) Annmarie Drury is Associate Professor in the Department of English at Queens College, CUNY. She is the author of Translation as Transformation in Victorian Poetry and is a translator of Swahili poetry. Marcel Kurpershoek (Translator) Marcel Kurpershoek is a senior research fellow at New York University Abu Dhabi. He is a specialist in the oral traditions and poetry of Arabia and has written the five-volume Oral Poetry and Narratives from Central Arabia, as well as several books on Middle Eastern historical and cultural topics. Formerly a diplomat for the Netherlands, he served as ambassador to Pakistan, Afghanistan, Turkey, and Poland, and as special envoy to Syria until 2015.