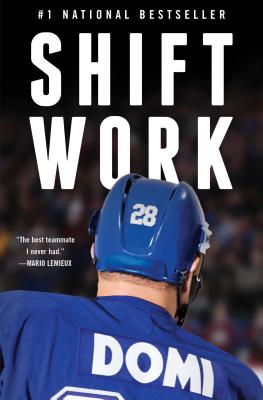 From hockey’s most prolific fighter comes a sports memoir unlike any other—passionate, funny, and candid, Shift Work chronicles Domi’s sixteen tumultuous seasons in the NHL.

Making it through a single fight as an enforcer in the NHL is a sign of toughness. Making it through 333 of them is a mark of greatness. Whether it was on the ice or off it, Tie Domi was driven to be the best at his job and was gifted with an extraordinary ability to withstand pain. He made a career out of protecting the people around him and became known as someone who would stand up for the people who needed it most.

Raised by immigrant parents in Belle River, Domi found success from an early age on the field and the rink. A gifted athlete in whatever sport he played, Tie eventually focused his sights on hockey. As he moved up the junior ranks, he made a name for himself as a player who was always ready to take on anyone who dared to cross his teammates.

Tie’s reputation followed him into the NHL, and it wasn’t long before he ranked among the game’s most feared—and fearless—enforcers. From New York to Winnipeg to Toronto, Tie quickly became a fan favourite in whatever city he played. As he went about working his name into the record books, Tie surrounded himself with people from every walk of life, learning from each one as he evolved into a respected leader who was never afraid to tell it like it was.

In Shift Work, Tie recounts the ups and downs of his life on and off the ice, showing what he has learned and how he has grown as both a player and a person. He offers insight into the most memorable points of his career, sharing his successes and mistakes with unparalleled honesty. Shift Work shows Tie Domi as he is—a devoted father and friend, a valued and loyal team player, a magnetic personality, and an athlete of immense skill and courage.

Tie Domi was raised in Belle River, Ontario. Over his sixteen-year NHL career, he played for the New York Rangers, the Winnipeg Jets, and the Toronto Maple Leafs, where he was and still is a beloved fan favourite. With 333 career NHL fights, Domi has the most fights in NHL history.  Now a consultant, Domi is also active in many charitable foundations. He is the proud father of Carlin, Max, and Avery. Domi splits his time between Toronto and New York City, where he spends time with his girlfriend, Heather.

Jim Lang is a Canadian sportscaster, journalist, and the coauthor of hockey memoirs by Tie Domi, Max Domi, Wendel Clark, and Brian Berard, as well as Everyday Hockey Heroes with Bob McKenzie. He hosts The Jim Lang Show. He lives outside Toronto with his wife and kids. Follow him on Twitter @JimLangSports.