On Grief and Grieving: Finding the Meaning of Grief Through the Five Stages of Loss (Paperback) 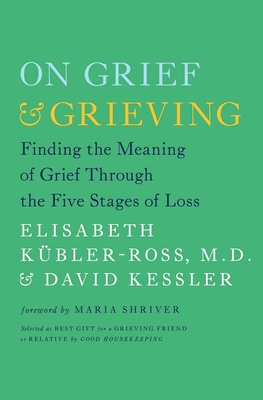 By Elisabeth Kübler-Ross, David Kessler, Maria Shriver (Foreword by)
$17.00
ON HAND in at least ONE of our stores. Click through or call for up-to-the-minute availability.

Ten years after the death of Elisabeth Kübler-Ross, this commemorative edition of her final book combines practical wisdom, case studies, and the authors’ own experiences and spiritual insight to explain how the process of grieving helps us live with loss. Includes a new introduction and resources section.

Elisabeth Kübler-Ross’s On Death and Dying changed the way we talk about the end of life. Before her own death in 2004, she and David Kessler completed On Grief and Grieving, which looks at the way we experience the process of grief.

Just as On Death and Dying taught us the five stages of death—denial, anger, bargaining, depression, and acceptance—On Grief and Grieving applies these stages to the grieving process and weaves together theory, inspiration, and practical advice, including sections on sadness, hauntings, dreams, isolation, and healing. This is “a fitting finale and tribute to the acknowledged expert on end-of-life matters” (Good Housekeeping).

Elisabeth Kübler-Ross, MD, [1926–2004] was a Swiss-born psychiatrist, humanitarian, and co-founder of the hospice movement around the world. She was also the author of the groundbreaking book On Death and Dying, which first discussed The Five Stages of Grief. Elisabeth authored twenty-four books in thirty-six languages and brought comfort to millions of people coping with their own deaths or the death of a loved one. Her greatest professional legacy includes teaching the practice of humane care for the dying and the importance of sharing unconditional love. Her work continues by the efforts of hundreds of organizations around the world, including The Elisabeth Kübler-Ross Foundation: EKRFoundation.org.

David Kessler is the world’s foremost expert on grief. His experience with thousands of people on the edge of life and death has taught him the secrets to living a fulfilled life, even after life’s tragedies. He coauthored On Grief and Grieving and Life Lessons with Elizabeth Kübler-Ross and You Can Heal Your Heart: Finding Peace After a Breakup, Divorce or Death with Louise Hay. He is the author of Finding Meaning; Visions, Trips, and Crowded Rooms; and The Needs of the Dying, praised by Mother Teresa.

David’s work has been featured in the New York Times, Los Angeles Times, Business Week, and Life Magazine, and on CNN, Fox, NBC, PBS, and CBS. David has served on the Red Cross Aviation Disaster Team and has volunteered for decades as a Los Angeles Police Department Specialist Reserve Officer. He lectures for physicians, nurses, counselors, police, and first responders and leads talks and retreats for those dealing with grief.

Maria Shriver is a Peabody and Emmy Award-winning journalist and the NYT bestselling author of Ten Things I Wish I'd Known Before I Went Into the Real World and the children's books What's Wrong With Timmy?, What's Happening to Grandpa?, and What's Heaven? In 1983 she became a national reporter at CBS News; she later moved to NBC, where she anchored a variety of news programs and specials as well as covering presidential races and other stories. She lives with her husband, Governor Arnold Schwarzenegger, and their four children in Los Angeles.

The Alzheimer’s Association is the leading voluntary health organization in Alzheimer care, support and research. Their mission is to eliminate Alzheimer's disease through the advancement of research; to provide and enhance care and support for all affected; and to reduce the risk of dementia through the promotion of brain health.