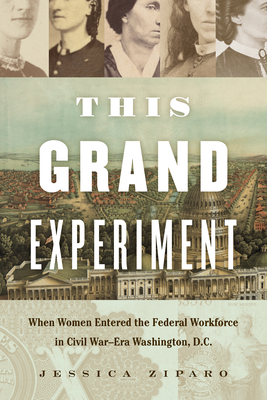 By Jessica Ziparo
$53.93
NOT on our shelves now. Usually ships 1-10 business days from warehouse. ETA will be updated with email order confirmation.

In the volatility of the Civil War, the federal government opened its payrolls to women. Although the press and government officials considered the federal employment of women to be an innocuous wartime aberration, women immediately saw the new development for what it was: a rare chance to obtain well-paid, intellectually challenging work in a country and time that typically excluded females from such channels of labor. Thousands of female applicants from across the country flooded Washington with applications. Here, Jessica Ziparo traces the struggles and triumphs of early female federal employees, who were caught between traditional, cultural notions of female dependence and an evolving movement of female autonomy in a new economic reality. In doing so, Ziparo demonstrates how these women challenged societal gender norms, carved out a place for independent women in the streets of Washington, and sometimes clashed with the female suffrage movement.

Examining the advent of female federal employment, Ziparo finds a lost opportunity for wage equality in the federal government and shows how despite discrimination, prejudice, and harassment, women persisted, succeeding in making their presence in the federal workforce permanent.