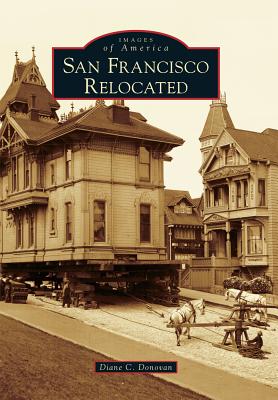 By Diane C. Donovan
$21.99
ON HAND in at least ONE of our stores. Click through or call for up-to-the-minute availability.

San Francisco's colorful history has been explored so extensively that it is surprising to note that its moved buildings remain one of the city's best-kept secrets. Reports are widely scattered in newspapers and architectural references; yet, despite the fact that the city's relocations are second only to Chicago's, there are no books in print concerning this curious history--until now. And it is a long, lively tale indeed. Beginning in 1850 and continuing today, it involves hundreds of moved structures, from houses and apartment buildings to churches and schools. Buildings were relocated for many reasons, from street modifications in the early 1900s to the advent of freeways and Bay Area Rapid Transit (BART) in the 1950s and 1960s. Buildings were cut in half and moved in pieces, disassembled and moved brick by brick, or (more commonly) moved intact--some as heavy as 9,000 tons or as long as 110 feet. Buildings moved to San Francisco via ship around Cape Horn, traveled across town using horses and wagons or (later) trucks, and were barged over the Bay.