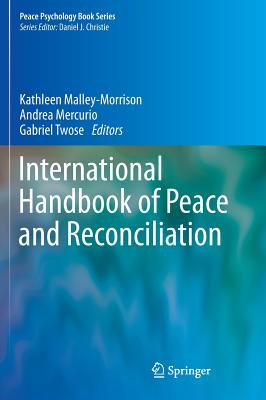 How do ordinary people from different regions around the world define peace and reconciliation? What factors do they think are necessary for promoting reconciliation between countries? Do they believe that individuals have a right to protest against war and in favor of peace? Do they believe that apologies can improve the chances of reconciliation? What do they think are the best ways for achieving peace? Does reasoning regarding the achievability of world peace vary by region? International Handbook of Peace and Reconciliation, a companion volume to the International Handbook on War, Torture, and Terrorism, examines and analyzes how people around the world think about justice, governmental apologies, the right to protest, the peace process, the justifiability of armed conflict, the possibility of world peace, and reconciliation. To address these questions, researchers from the Group on International Perspectives on Governmental Aggression and Peace (GIPGAP) administered the Personal and Institutional Rights to Aggression and Peace Survey (PAIRTAPS) to volunteers from over 40 countries representing the major regions of the world. The volume is organized such that the responses to the survey are summarized and analyzed by both by country and by theme. Integrative chapters provide an up-to-date overview of historical and current events relevant to peace and reconciliation and a grounded theory analysis of definitions of peace and reconciliation and of the role of apology in reconciliation. In addition to describing the major themes emerging from the responses in each region, the volume reports on some exploratory analyses addressing the extent to which we found differences in patterns of responding based on characteristics such as gender, military experience, and involvement in anti-war protest activity. International Handbook on Peace and Reconciliation allows ordinary citizens from around the world to voice their views on peace and related issues, and examines the context of these views. Thus, it offers researchers in political science, peace psychology, social psychology, social justice, and anthropology a comprehensive resource for a changing global landscape.

Kathleen Malley-Morrison is professor of psychology in the Human Development Program, Boston University. Her undergraduate major at Swarthmore College was history, and her graduate degree from Boston University was in Special Education. During her last two years of graduate school she focused primarily on developmental psychology, and her dissertation was a developmental analysis of cognitive ability and cognitive style from kindergarten through the eighth grade. She has been a member of the Psychology Department at Boston University since 1970. In recent years, Malley-Morrison's research and publications have focused primarily on international perspectives on state-sponsored violence and peace. As leader of an international consortium of researchers (the Group on International Perspectives on Governmental Aggression and Peace; GIPGAP), she led the development of the Personal and Institutional Rights to Aggression and Peace Survey (PAIRTAPS), which has been administered in more than 40 different countries, with participants from every continent except Antarctica. Chapters focusing on survey findings from each of 40 countries in which the survey was administered were published in a four volume series on State Violence and the Right to Peace for Praeger Security International, published in 2009.