The Cook Up: A Crack Rock Memoir (Paperback) 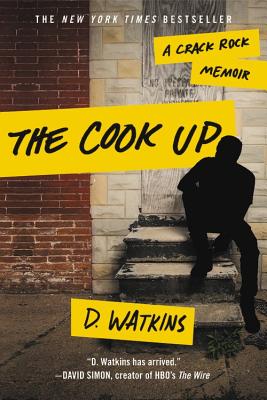 By D. Watkins
Not available to order
Stock uncertain--should fulfill within 10 days or so

Reminiscent of the classic Random Family and The Short and Tragic Life of Robert Peace, but told by the man who lived it, The Cook Up is a riveting look inside the Baltimore drug trade portrayed in The Wire and an incredible story of redemption.

The smartest kid on his block in East Baltimore, D. was certain he would escape the life of drugs, decadence, and violence that had surrounded him since birth. But when his brother Devin is shot-only days after D. receives notice that he's been accepted into Georgetown University-the plans for his life are exploded, and he takes up the mantel of his brother's crack empire. D. succeeds in cultivating the family business, but when he meets a woman unlike any he's known before, his priorities are once more put into question. Equally terrifying and hilarious, inspiring and heartbreaking, D.'s story offers a rare glimpse into the mentality of a person who has escaped many hells.

D. Watkins is a columnist for Salon. His work has been published in the New York Times, Guardian, Rolling Stone, and other publications. He holds a master's in Education from Johns Hopkins University and an MFA in Creative Writing from the University of Baltimore. He is a college professor at the University of Baltimore and founder of the BMORE Writers Project. Watkins has been the recipient of numerous awards including Ford's Men of Courage and a BME Fellowship. Watkins is from and lives in East Baltimore. He is the author of The Beast Side: Living (and Dying) While Black in America.

"D. Watkins is beautifully unusual. Having lived the horrors within the heart of our inner city Baltimore first-hand and having acquired the heights of collegiate achievement, D. Watkins is uniquely equipped to communicate our political and social challenges of urban America not only through the lens of academia but through empirical knowledge as well. He is the voice of the future seamlessly blending the wisdom of the streets and intellectual prowess in a way I have never experienced before."
—Jada Pinkett Smith

"The East Baltimore of D. Watkins is distant from where I live by twenty-five, maybe thirty blocks. It might as well be a country other than my own. This is the United State we abandoned and then forgot, the margins of a thriving, information-age America where mass labor is no longer essential, where the factories and warehouses and piers are empty or gone, and where Johns Hopkins University is the second largest employer -next to the illegal drug trade. And the corners are always hiring. That Watkins threaded his way from those corners to the page is rare enough. That he is so committed to pulling this world through with him-enough of it to at least rub our noses in it and make us acknowledge some collective responsibility--is precious. These are angry pages."
—David Simon, author of The Corner and creator, HBO's The Wire

"THE COOK UP delivers a raw and honest account of life in East Baltimore and a narrative of incredible strength and redemption. D. Watkins is truly an artist."
—King Mez, hip-hop artist

"D. Watkins is his generation's David Simon. Another brilliant storyteller who takes you into the heart of East Baltimore and never flinches as he shows you the real."
—Touré, author of Who's Afraid of Post-Blackness? What It Means to Be Black Now

"Amazing storytelling that brings us deep into the reality of East Baltimore. A moving and important piece of contemporary memoir."
—Wes Moore, New York Times bestselling author of The Work and The Other Wes Moore

"THE COOK UP is an important story for both black and white America, as well as this country's political leadership, to read, if we're truly going to tackle the challenges that are facing our communities all across the country."
—Chuck Todd, correspondent on NBC's Meet the Press

"THE COOK UP is classic and cinematic, told with an observational acuity that hits you where it hurts."
—Frannie Kelley, host of NPR's Microphone Check

"THE COOK UP is an unflinching, raw, coming-of-age account of the personal impact of the drug trade. Simply a must-read."
—DeRay Mckesson, activist and organizer

"D. Watkins' THE COOK UP is a bold, necessary dispatch from the streets, where a kid born into a hustler's life must fight for survival-and his soul. Watkins may have been a drug dealer, but he was caught up in his own addictions: To rampant consumerism, the numbness of Percocets, and a fantasy of the high-flying American dream. His book shows the astonishing evolution of a man who traded cheap fixes for the mighty power of the written word."
—Sarah Hepola, New York Times bestselling author of Blackout: Remembering the Things I Drank to Forget

"In the tradition of James Baldwin's "Letter From a Region in My Mind," THE COOK UP is a personal history that complicates racial stereotypes...Watkins knows his readers live in different Americas. THE COOK UP is their invitation to notice one another standing in the same line."
—TheAtlantic.com