She Votes: How U.S. Women Won Suffrage, and What Happened Next (Hardcover) 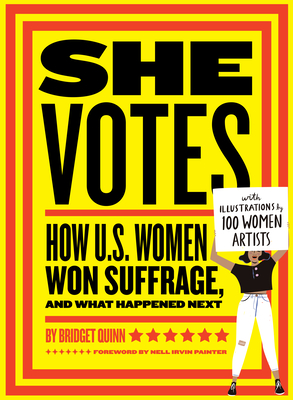 She Votes is an intersectional story of the women who won suffrage, and those who have continued to raise their voices for equality ever since.

From the first female Principal Chief of the Cherokee Nation to the first woman to wear pants on the Senate floor, author Bridget Quinn shines a spotlight on the women who broke down barriers.

This deluxe book also honors the 100th anniversary of the Nineteenth Amendment with illustrations by 100 women artists.

She Votes is a refreshing and illuminating book for feminists of all kinds.

Each artist brings a unique perspective; together, they embody the multiplicity of women in the United States.

• From the pen of rockstar author and historian Bridget Quinn, this book tells the story of women's suffrage.
• Perfect gift for feminists of all ages and genders who want to learn more about the 19th amendment and the journey to equal representation
• A visually gorgeous book that will be at home on the shelf or on the coffee table
• Add it to the shelf with books like Notorious RBG: The Life and Times of Ruth Bader Ginsburg by Irin Carmon and Shana Knizhnik; Rad American Women A-Z: Rebels, Trailblazers, and Visionaries who Shaped Our History . . . and Our Future! by Kate Schatz and Miriam Klein Stahl; and Why I March: Images from The Women's March Around the World by Abrams Books.

BRIDGET QUINN is author of the award-winning Broad Strokes: 15 Women Who Made Art and Made History (in That Order), published by Chronicle Books in 2017. The book has been translated into four languages and selected for the Amelia Bloomer Book List of recommended feminist literature by the American Library Association. A graduate of New York University's Institute of Fine Arts and a regular contributor to online arts magazine Hyperallergic, Quinn is a sought-after speaker on women and art. She is an avid sports fan and Iron(wo)man triathlete, and her Narrative magazine essay "At Swim, Two Girls" was included in The Best American Sports Writing 2013. She lives in San Francisco with her family.

Nell Irvin Painter is a historian, author, and artist.

“Don’t assume you know enough about the women’s rights movement in America until you read Bridget Quinn’s She Votes. With inclusion as her guiding principle, Quinn tears down myths surrounding the passage of the Nineteenth Amendment and introduces us to the many witty and wise ’ladies’ who have helped us get this far and who inspire us to go further still.” —Tabitha Soren, artist, photographer, author of Fantasy Life, and former political correspondent for MTV News who spearheaded the Peabody Award-winning voter campaign Choose or Lose

“Bridget Quinn’s beautifully illustrated book She Votes not only tells the story of suffrage, but captures the many battles since for women’s full rights. As the suffragists had hoped and as She Votes chronicles, the power of women’s votes is setting the course on the nation’s long struggle for full equality and justice for all.” —Katherine Spillar, executive director of the Feminist Majority Foundation and executive editor of Ms. magazine

“Wise, wry, and exuberant, Bridget Quinn’s She Votes takes us through the tumultuous battle for women’s voting rights. The original artwork dazzles. It’s an inspiring call to action and the celebration that the centennial deserves.” —Vanessa Hua, author of A River of Stars and Deceit and Other Possibilities, winner of the Asian/Pacific American Award in Literature, award-winning columnist for The San Francisco Chronicle, and National Endowment for the Arts Literature Fellow

“She Votes is quite simply a call to action, a message to today’s women warriors from their badass foremothers to pick up the baton and keep fighting. Told briskly and with biting humor, She Votes is filled with delicious details that correct the record (even the sainted white suffragists were bigots) and illustrate clearly women’s political savvy and tenacity. Did they win? Sometimes. But as they knew—and as Quinn tells us in a history that travels from pre-Seneca Falls to post-Riot Grrrls—the fight is far from over. She Votes is a shot of adrenaline into the body ’feminism’ before the next bugle call.” —Mary Gabriel, author of Ninth Street Women and National Book Award and Pulitzer Prize finalist

“In a time when women’s-suffrage histories are finally in abundance, Quinn’s illustrated compendium stands out (and not only through its vivid illustrations). With language that pulls no punches, she tells the story of women’s fight for equality, from the example set by the Haudenosaunee to the riot grrrl movement and the founders of Black Lives Matter.” —Booklist starred review

“She Votes is accessible, witty and fun…. Sprinkled throughout the 19 chapters are 100 gorgeous renditions of pioneering people or moments, each impeccably illustrated by some of today’s most renowned and up-and-coming illustrators.” —San Francisco Chronicle

“A vibrant and witty chronicle of women’s rights in America…. Colorful, attention-grabbing illustrations in a diverse array of styles enhance Quinn’s snappy prose on nearly every page. This soaring movement history has something for neophytes and experts alike.” —Publishers Weekly starred review