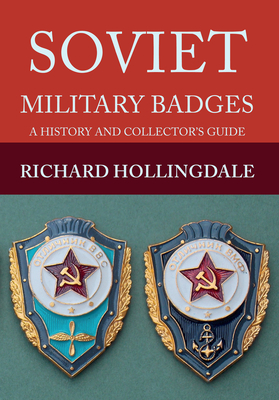 At its height in the late twentieth-century, the Soviet Armed Forces boasted one of the world’s largest armies. Yet, in the twenty-five years that have passed since the fall of the Soviet Union, much of its material culture has fast disappeared. Soviet Military Badges: A History and Collector’s Guide, therefore, offers the reader a timely tour of a little-known subject within the English language. In its pages are detailed the badges awarded to the officers and men of the Soviet Army, Navy, Air Force and Frontier Guards found during the Cold War era. Captured in full colour and accompanied by a wealth of archive photographs, this book examines such categories as sports badges, proficiency clasps, and awards for excellence from the start of the Cold War in 1949 through to the end of the USSR in 1991. Each section is observed in detail using the obverse and reverse views in order to identify and date each badge, in addition to charting the changes in design and manufacture encountered over time (often helping the reader identify the rarer and more valuable examples).Richard Hollingdale is a writer and academic historian specialising in the armies of the Eastern Bloc. He is a frequent contributor to The Armourer Magazine and has written numerous articles on the Soviet military and other Warsaw Pact nations. His earlier publication, Warsaw Pact Badges, offered the first detailed study of Eastern Bloc badges in the English language. Soviet Military Badges follows this tradition by presenting the reader with a detailed catalogue of Soviet badges that can be used as both a history and a collector’s guide.

Richard Hollingdale is an academic historian. Prior to becoming a secondary school teacher, he worked for three years as a field archaeologist. His publishing career began in 2003-2004 with the publication of four articles for Toy Soldier & Model Figure Magazine. He has been publishing articles with The Armourer Magazine since 2009, specialising in the armies of the Eastern Bloc, and has had fifteen articles published to date. He has also written book reviews, auction reports, news pages and proofread submissions as Feature Editor for the Armourer Magazine and Classic Arms & Militaria Magazine. In 2010, his book 'Warsaw Pact Badges' was published by Crowood Books.