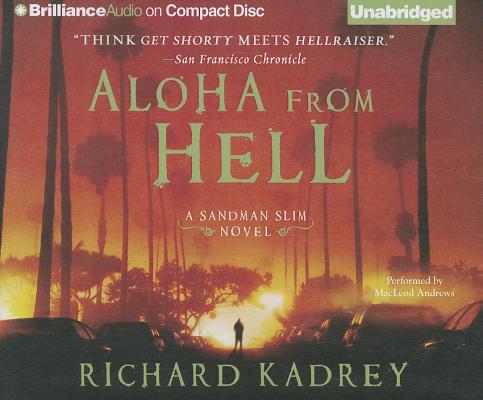 By Richard Kadrey, MacLeod Andrews (Read by)
Not available to order
Stock uncertain--should fulfill within 10 days or so

“I've laughed at the opening page of every one of Richard Kadrey's Sandman Slim novels, and this one was no different. Kadrey's willfully angry, sarcastic, and borderline evil protagonist Stark is back, and he's here in style. With another war between heaven and hell brewing, Stark has some nasty business to take care of and he's going to have to go back downstairs to hell to deal with it. Kadrey wraps up a trilogy with this novel, and he does it the way he always has, with amusing, witty writing and a film noir patter that ranks up there with some of the best.”
— Lincoln Eddy, Schuler Books & Music, Okemos, MI

In Sandman Slim Stark came back from hell for revenge.

In Kill the Dead he tackled both a zombie plague and being Lucifer's bodyguard.

Once again all is not right in L.A. Lucifer is back in Heaven, God is on vacation, and an insane killer mounts a war against both Heaven and Hell.
Stark's got to head back down to his old stomping grounds in Hell to rescue his long lost love, stop an insane serial killer, prevent both Good and Evil from completely destroying each other, and stop the demonic Kissi from ruining the party for everyone.

Even for Sandman Slim, that's a tall order. And it's only the beginning.