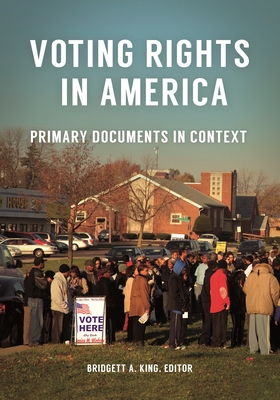 Voting is often described as the central pillar of American democracy. Yet at various points in the history of the United States, the franchise was kept away from people without landholdings, women, black people, and young members of the armed forces who were nonetheless deemed old enough to risk their lives in the defense of their nation. Even today, many observers contend that the right to vote is being eroded by a pernicious combination of political and social factors.

This work uses primary sources, in concert with broad, context-setting historical overviews and an illuminating introduction to each document, to examine the full scope and importance of the struggle for voting rights in America. Coverage ranges from major historical landmarks such as women's suffrage, the Voting Rights Act of 1965, and the heavily contested Bush-Gore presidential election of 2000 to documents that examine current controversies about alleged voter suppression, claims of voter fraud, Russian interference in American elections, and the impact of Supreme Court decisions past and present on the constitutional right to vote.

Bridgett A. King, PhD, is assistant professor of political science at Auburn University and a contributor to the Election Center Certified Elections/Registration Administrator (CERA) program.