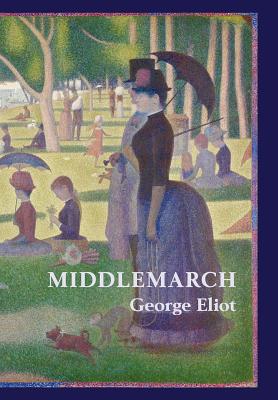 By George Eliot
$32.39
NOT on our shelves now. Usually ships from warehouse in several days.

Subtitled "A Study of Provincial Life," this powerful novel is set in the fictitious Midlands town of Middlemarch during the early 1830s. With its multiple plots and large cast of characters, it pursues a number of underlying themes, including the status of women, the nature of marriage, idealism and self-interest, religion and hypocrisy, political reform, and education. Middlemarch has retained its popularity and status as one of the masterpieces of English fiction. Virginia Woolf gave the book unstinting praise, describing it as "the magnificent book that, with all its imperfections, is one of the few English novels written for grown-up people." Martin Amis and Julian Barnes have cited it as probably the greatest novel in the English language. It was George Eliot's ambition to portray an entire community-tradespeople, middle classes, country gentry. Vast and crowded, rich in narrative irony and suspense, Middlemarch is richer still in character and in its sense of how individual destinies shape--and are shaped by--the community. Newly designed and typeset by Waking Lion Press.