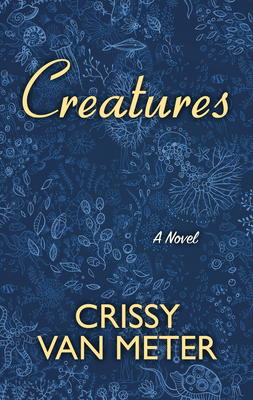 “Creatures is a novel that invokes the senses most often left to the wayside in fiction: touch, taste, and smell. This imagery is unique to how Evie, our narrator, perceives her surroundings of Winter Island and the people who float in and out of her life. As readers experience Evie’s past, present, and future concurrently, they are left with a stark and stunning tale of abandonment, betrayal, love, and healing. With a narrative style reminiscent of Ted Chiang’s The Story of Your Life, this is a book I couldn’t put down!”
— Julia Long, Epilogue: Books Chocolate Brews, Chapel Hill, NC

“An atmospheric, literary debut novel set on Winter Island, off the coast of Los Angeles. A sea researcher who grew up on the isolated, wild island is about to marry her fisherman sweetheart when her estranged mother turns up on the island and a storm dredges up a beached whale. The writing is stunning and meanders from the wildness of nature to the wildness of the local inhabitants and their unpredictable, fragile lives.”
— Lisa Ekelman, Bookworm of Edwards, Edwards, CO

"Van Meter's debut is an unwavering triumph . . . A coming-of-age that's as human as it is wild." --The New York Times Book Review

On the eve of Evangeline's wedding, on the shore of Winter Island, a dead whale is trapped in the harbor, the groom may be lost at sea, and Evie's mostly absent mother has shown up out of the blue. From there, in this mesmerizing, provocative debut, the narrative flows back and forth through time as Evie reckons with her complicated upbringing in this lush, wild land off the coast of Southern California.

Evie grew up with her well-meaning but negligent father, surviving on the money he made dealing the island's world-famous strain of weed, Winter Wonderland. Although her father raised her with a deep respect for the elements, the sea, and the creatures living within it, he also left her to parent herself. With wit, love, and bracing flashes of anger, Creatures probes the complexities of love and abandonment, guilt and forgiveness, betrayal and grief--and the ways in which our childhoods can threaten our ability to love if we are not brave enough to conquer the past.

Lyrical, darkly funny, and ultimately cathartic, Creatures exerts a pull as strong as the tides.

Crissy Van Meter grew up in Southern California. Her writing has appeared in Vice, Bustle, Guernica, and Catapult. She holds an MFA in creative writing from the New School. She lives in Los Angeles.