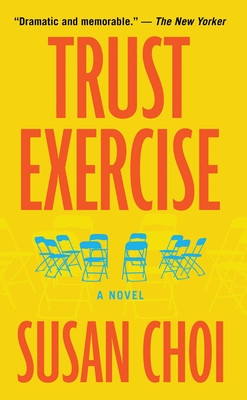 “Set inside the acting program of an elite high school, Choi’s novel seems to consider every major preoccupation of our moment — class, gender, sexuality, race, power, predation, authenticity, ‘genius’ — with language that’s both uproarious and frothing with vital rage. To describe the plot in any detail, though, would reveal too much of Trust Exercise’s inventive, audacious form. Best let this novel sink into your bones with as few spoilers as possible before its final scene seizes your heart. And it will seize your heart. Trust me.”
— Samuel Krowchenko, Literati Bookstore, Ann Arbor, MI

“A psychological masterclass. I can think of no better place to dissect how micro actions toward each other suggest macro feelings than a famous arts high school where emotions, power dynamics, and naivete mascarading as bravado are at their peak and ever shifting. Many have said, and I will too, that you have to read this one knowing as little as possible about what to expect. All I’ll say is that it left me with a potent emotion spurred by a slowly revealed truth, not just about the characters but about our world, and Susan Choi is a genius.”
— Molly Moore, BookPeople, Austin, TX

An Indie Next Pick Named to 11 Best Book ListsSet in the 1980s at a highly competitive suburban performing arts high school, Trust Exercise will incite heated discussions about fiction and truth, friendships and loyalties, and will leave readers with wiser understandings of the true capacities of adolescents and the powers and responsibilities of adults.

Susan Choi is the author of the novels My Education, A Person of Interest, American Woman, and The Foreign Student. Her work has been a finalist for the Pulitzer Prize and the PEN/Faulkner Award and winner of the PEN/W.G. Sebald Award and the Asian-American Literary Award for fiction. With David Remnick, she co-edited Wonderful Town: New York Stories from The New Yorker. She's received NEA and Guggenheim Foundation fellowships. She lives in Brooklyn.