Dune: Book One in the Dune Chronicles (CD-Audio) 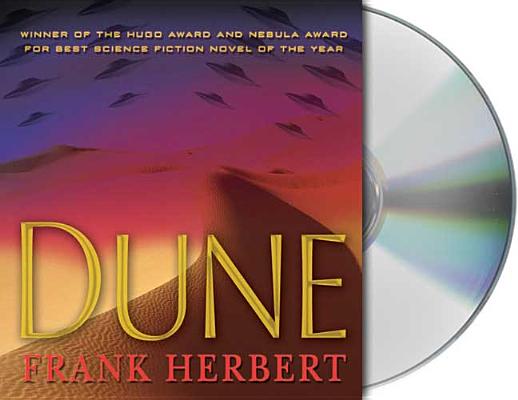 Set on the desert planet Arrakis, Dune is the story of the boy Paul Atreides, who would become the mysterious man known as Muad'dib. He would avenge the traitorous plot against his noble family—and would bring to fruition humankind's most ancient and unattainable dream.

A stunning blend of adventure and mysticism, environmentalism and politics, Dune won the first Nebula Award, shared the Hugo Award, and formed the basis of what is undoubtedly the grandest epic in science fiction. Frank Herbert's death in 1986 was a tragic loss, yet the astounding legacy of his visionary fiction will live forever.

Frank Herbert (1920-1986) created the most beloved novel in the annals of science fiction, Dune.  He was a man of many facets, of countless passageways that ran through an intricate mind.  His magnum opus is a reflection of this, a classic work that stands as one of the most complex, multi-layered novels ever written in any genre.  Today the novel is more popular than ever, with new readers continually discovering it and telling their friends to pick up a copy.  It has been translated into dozens of languages and has sold almost 20 million copies.

As a child growing up in Washington State, Frank Herbert was curious about everything. He carried around a Boy Scout pack with books in it, and he was always reading.  He loved Rover Boys adventures, as well as the stories of H.G. Wells, Jules Verne, and the science fiction of Edgar Rice Burroughs.  On his eighth birthday, Frank stood on top of the breakfast table at his family home and announced, "I wanna be a author."  His maternal grandfather, John McCarthy, said of the boy, "It's frightening. A kid that small shouldn't be so smart." Young Frank was not unlike Alia in Dune, a person having adult comprehension in a child's body.  In grade school he was the acknowledged authority on everything.  If his classmates wanted to know the answer to something, such as about sexual functions or how to make a carbide cannon, they would invariably say, "Let's ask Herbert. He'll know."

His curiosity and independent spirit got him into trouble more than once when he was growing up, and caused him difficulties as an adult as well.  He did not graduate from college because he refused to take the required courses for a major; he only wanted to study what interested him.  For years he had a hard time making a living, bouncing from job to job and from town to town. He was so independent that he refused to write for a particular market; he wrote what he felt like writing.  It took him six years of research and writing to complete Dune, and after all that struggle and sacrifice, 23 publishers rejected it in book form before it was finally accepted. He received an advance of only $7,500.

His loving wife of 37 years, Beverly, was the breadwinner much of the time, as an underpaid advertising writer for department stores.  Having been divorced from his first wife, Flora Parkinson, Frank Herbert met Beverly Stuart at a University of Washington creative writing class in 1946.  At the time, they were the only students in the class who had sold their work for publication.  Frank had sold two pulp adventure stories to magazines, one to Esquire and the other to Doc Savage.  Beverly had sold a story to Modern Romance magazine.  These genres reflected the interests of the two young lovers; he the adventurer, the strong, machismo man, and she the romantic, exceedingly feminine and soft-spoken.

Their marriage would produce two sons, Brian, born in 1947, and Bruce, born in 1951. Frank also had a daughter, Penny, born in 1942 from his first marriage.  For more than two decades Frank and Beverly would struggle to make ends meet, and there were many hard times.  In order to pay the bills and to allow her husband the freedom he needed in order to create, Beverly gave up her own creative writing career in order to support his.  They were in fact a writing team, as he discussed every aspect of his stories with her, and she edited his work.  Theirs was a remarkable, though tragic, love story-which Brian would poignantly describe one day in Dreamer of Dune (Tor Books; April 2003).  After Beverly passed away, Frank married Theresa Shackelford.

In all, Frank Herbert wrote nearly 30 popular books and collections of short stories, including six novels set in the Dune universe: Dune, Dune Messiah, Children of Dune, God Emperor of Dune, Heretics of Dune, and Chapterhouse: Dune.  All were international bestsellers, as were a number of his other science fiction novels, which include The White Plague and The Dosadi Experiment.  His major novels included The Dragon in the Sea, Soul Catcher (his only non-science fiction novel), Destination: Void, The Santaroga Barrier, The Green Brain, Hellstorm's Hive, Whipping Star, The Eyes of Heisenberg, The Godmakers, Direct Descent, and The Heaven Makers. He also collaborated with Bill Ransom to write The Jesus Incident, The Lazarus Effect, and The Ascension Factor.  Frank Herbert's last published novel, Man of Two Worlds, was a collaboration with his son, Brian.

Scott Brick first began narrating audiobooks in 2000, and after recording almost 400 titles in five years, AudioFile magazine named Brick a Golden Voice and “one of the fastest-rising stars in the audiobook galaxy.” He has read a number of titles in Frank Herbert’s bestselling Dune series, and he won the 2003 Science Fiction Audie Award for Dune: The Butlerian Jihad. Brick has narrated for many popular authors, including Michael Pollan, Joseph Finder, Tom Clancy, and Ayn Rand. He has also won over 40 AudioFile Earphones Awards and the AudioFile award for Best Voice in Mystery and Suspense 2011. In 2007, Brick was named Publishers Weekly’s Narrator of the Year.

Brick has performed on film, television and radio. He appeared on stage throughout the United States in productions of Cyrano, Hamlet, Macbeth and other plays. In addition to his acting work, Brick choreographs fight sequences, and was a combatant in films including Romeo and Juliet, The Fantasticks and Robin Hood: Men in Tights. He has also been hired by Morgan Freeman to write the screenplay adaptation of Arthur C. Clarke’s Rendezvous with Rama.

Orlagh Cassidy is the winner of the 2009 Best Voice in Children & Family Listening and the 2008 and 2011 Best Voice in Mystery & Suspense. She’s narrated for Jacqueline Winspear, James Patterson, Erica Spindler, Beth Harbison, and Frank Herbert, among others.

Cassidy’s Broadway credits include Present Laughter with Frank Langella, Our Country's Good, and Suddenly Last Summer.  She has appeared Off-Broadway in Bright Ideas and The Field at The Irish Rep (Drama Desk Nomination). She was "Doris Wolfe" on The Guiding Light and her other television appearances include Sex and the City, Law & Order, Law and Order SVU, and Elementary.  She also appeared in the films Purple Violets, Young Adult, and Definitely, Maybe.

Simon Vance is the critically acclaimed narrator of approximately 400 audiobooks, winner of 27 AudioFile Earphones Awards, and a 12-time Audie Award-winner. He won an Audie in 2006 in the category of Science Fiction and was named the 2011 Best Voice in Biography and History and in 2010 Best Voice in Fiction by AudioFile magazine.

Vance has been a narrator for the past 25 years, and also worked for many years as a BBC Radio presenter and newsreader in London.  Some of his best-selling and most praised audiobook performances include Stieg Larsson’s The Girl with the Dragon Tattoo, Hilary Mantel’s Bring Up the Bodies (an Audie award-winner), Ian Fleming’s Casino Royale, Oscar Wilde’s The Picture of Dorian Gray, Patrick O’Brian’s Master and Commander series (all 21 titles), the new productions of Frank Herbert’s original Dune series, and Rob Gifford’s China Road (an AudioFile 2007 Book of the Year). Vance lives near San Francisco with his wife and two sons.

Ilyana Kadushin is best known for her narration of the Twilight audiobook series, and has worked on other audiobooks, including The Memory Keeper’s Daughter, Post Grad and Dune, which won an Audie Award. Her other voice work includes national commercials, animation, and popular video games such as Lord of the Rings.

Kadushin has performed as both an actor and a singer for companies including Nickelodeon, BBC America, Sesame Street Television, MTV, and Cartoon network. She sang on the soundtrack of HBO Best Documentary Film Award & Finalist Separate But Equal.

Byron Jennings has narrated several Earphones Award-winning audiobooks.  Some of his most notable works include David Remnick and Henry Finder's Fierce Pajamas, Philip Kerr's Dark Matter, and Jeffrey Archer's False Impressions.  He has appeared on screen in the films Julie & Julia, Lincoln and A Simple Twist of Fate as well as in numerous television shows, including Gossip Girl, Judging Amy, White Collar, and Bottlenecked.  His stage performances include The Merchant of Venice, The Winter's Tale, Macbeth, and Dinner at Eight.

Jason Culp has been acting since the age of ten, and his credits include a variety of television, theater, and film roles. He is best known for his role as Julian Gerome on General Hospital.  In addition to voiceover work in national commercials, Culp has narrated audiobooks by bestselling authors such as Louis L’Amour, Danielle Steel, John Irving, and David Weber.  He has been recording since 1996 and has nearly 35 audiobooks under his belt.  Culp has also narrated documentaries for National Geographic and the History Channel.

Oliver Wyman, a native New Yorker, has appeared on stage as well as in film, and television. He is one of the founders of New York City's Collective Unconscious theater, and his performances include the award-winning “reality play” Charlie Victor Romeo and A.R. McElhinney's cult classic film A Chronicle of Corpses. He also lent his voice to several episodes of the Teenage Mutant Ninja Turtles. Oliver's work as a narrator extends to over 150 audiobooks and has won many him awards, including Audie awards for his reading of Lance Armstrong's autobiography, It's Not About the Bike, and Thomas L. Friedman's The World is Flat. He also read James Frey's A Million Little Pieces, Tim Dorsey's Atomic Lobster, and David Weber's By Schism Rent Asunder. Oliver has won five Audie Awards from the Audio Publisher's Association, fourteen Earphone Awards from AudioFile Magazine, and two Listen Up Awards from Publisher's Weekly. Oliver was named a 2008 Best Voice in Nonfiction & Culture by AudioFile Magazine.

Scott Sowers has narrated numerous audiobooks, including books by Douglas Preston, Robert Ludlum, John Hart, and Nicholas Sparks. He was named the 2008 Best Voice in Mystery & Suspense by AudioFile magazine. AudioFile also awarded Sowers an Earphones Award for his narration of John Hart’s Down River, writing, “[providing] a bewitching rhythm and pace, expertly capturing and elevating this story of redemption. The combination of Hart and Sowers provides the perfect marriage of prose and voice. Together they enable the book to transcend genre fiction and become something exceptional.”

Sowers is also an accomplished actor of both stage and screen. His theater credits include roles in Inherit the Wind, A Streetcar Named Desire, Bus Stop, and A Few Good Men. His many television credits include guest roles on Law & Order, The Black Donnellys, Six Degrees, All My Children, and the Hallmark Channel’s Season for Miracles. He has also appeared in the films Trust the Man, The Village and The Ten.

“Unique...I know nothing comparable to it except Lord of the Rings.” —Arthur C. Clarke

“One of the monuments of modern science fiction.” —Chicago Tribune

“Powerful, convincing, and most ingenious.” —Robert A. Heinlein

“A portrayal of an alien society more complete and deeply detailed than any other author in the field has managed...a story absorbing equally for its action and philosophical vistas...An astonishing science fiction phenomenon.” —The Washington Post