Dignity for Deeply Forgetful People: How Caregivers Can Meet the Challenges of Alzheimer's Disease (Paperback) 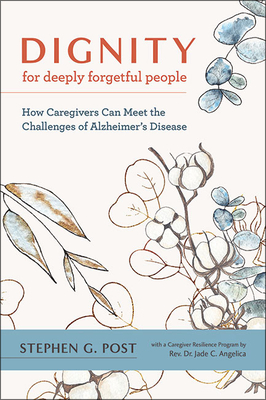 For caregivers of deeply forgetful people: a book that combines new ethics guidelines with an innovative program on how to communicate and connect with people with Alzheimer's.

How do we approach a deeply forgetful loved one so as to notice and affirm their continuing self-identity? For three decades, Stephen G. Post has worked around the world encouraging caregivers to become more aware of--and find renewed hope in--surprising expressions of selfhood despite the challenges of cognitive decline.

In this book, Post offers new perspectives on the worth and dignity of people with Alzheimer's and related disorders despite the negative influence of hypercognitive values that place an ethically unacceptable emphasis on human dignity as based on linear rationality and strength of memory. This bias, Post argues, is responsible for the abusive exclusion of this population from our shared humanity. With vignettes and narratives, he argues for a deeper dignity grounded in consciousness, emotional presence, creativity, interdependence, music, and a self that is not gone but differently abled. Post covers key practical topics such as:

- understanding the experience of dementia
- noticing subtle expressions of continuing selfhood, including paradoxical lucidity
- perspectives on ethical quandaries from diagnosis to terminal care and everything in between, as gleaned from the voices of caregivers
- how to communicate optimally and use language effectively
- the value of art, poetry, symbols, personalized music, and nature in revealing self-identity
- the value of trained dementia companion dogs

At a time when medical advances to cure these conditions are still out of reach and the most recent drugs have shown limited effectiveness, Post argues that focusing discussion and resources on the relational dignity of these individuals and the respite needs of their caregivers is vital. Grounding ethics on the equal worth of all conscious human beings, he provides a cautionary perspective on preemptive assisted suicide based on cases that he has witnessed. He affirms vulnerability and interdependence as the core of the human condition and celebrates caregivers as advocates seeking social and economic justice in an American system where they and their loved ones receive only leftover scraps. Racially inclusive and grounded in diversity, Dignity for Deeply Forgetful People also includes a workshop appendix focused on communication and connection, A Caregiver Resilience Program, by Rev. Dr. Jade C. Angelica.

Stephen G. Post is the director of the Center for Medical Humanities, Compassionate Care, and Bioethics at the Renaissance School of Medicine at Stony Brook University. He is the author of The Moral Challenge of Alzheimer Disease: Ethical Issues from Diagnosis to Dying.