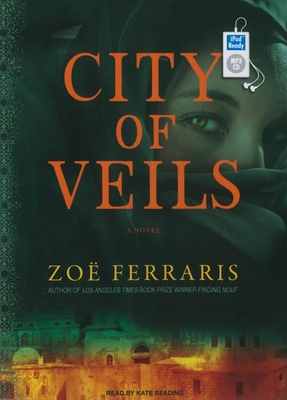 When the body of a brutally beaten woman is found on the beach in Jeddah, Saudi Arabia, Detective Osama Ibrahim dreads investigating another unsolvable murder--chillingly common in a city where the veils of conservative Islam keep women as anonymous in life as the victim is in death. But Katya, one of the few females in the coroner's office, is determined to identify the woman and find her killer. Aided by her friend Nayir, she soon discovers that the victim was a young, controversial filmmaker named Leila. Was it Leila's connection to an incendiary Koranic scholar or a missing American man that got her killed? City of Veils combines a suspenseful and tightly woven mystery with an intimate and nuanced portrait of women's lives in the Middle East.

Zoe Ferraris is the author of the novel "Finding Nouf," which won the "Los Angeles Times" Book Award for First Fiction.

Stage actress Kate Reading has been a freelance narrator for over twenty years. She has received multiple Audie Awards and nominations, as well as numerous Earphones Awards from "AudioFile" magazine, which has named her Narrator of the Year and, for two years running, Best Voice in Science Fiction and Fantasy.

"Stellar.... A searing portrait of the religious and cultural veils that separate Muslim women from the modern world." ---Publishers Weekly Starred Review