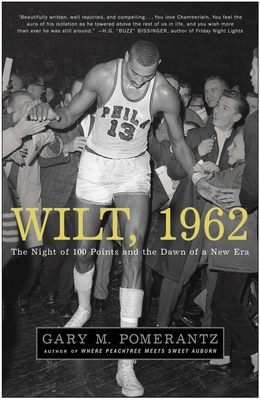 On the night of March 2, 1962, in Hershey, Pennsylvania, right up the street from the chocolate factory, Wilt Chamberlain, a young and striking athlete celebrated as the Big Dipper, scored one hundred points in a game against the New York Knickerbockers.

As historic and revolutionary as the achievement was, it remains shrouded in myth. The game was not televised; no New York sportswriters showed up; and a fourteen-year-old local boy ran onto the court when Chamberlain scored his hundredth point, shook his hand, and then ran off with the basketball. In telling the story of this remarkable night, author Gary M. Pomerantz brings to life a lost world of American sports.

In 1962, the National Basketball Association, stepchild to the college game, was searching for its identity. Its teams were mostly white, the number of black players limited by an unspoken quota. Games were played in drafty, half-filled arenas, and the players traveled on buses and trains, telling tall tales, playing cards, and sometimes reading Joyce. Into this scene stepped the unprecedented Wilt Chamberlain: strong and quick-witted, voluble and enigmatic, a seven-footer who played with a colossal will and a dancer’s grace. That strength, will, grace, and mystery were never more in focus than on March 2, 1962. Pomerantz tracked down Knicks and Philadelphia Warriors, fans, journalists, team officials, other NBA stars of the era, and basketball historians, conducting more than 250 interviews in all, to recreate in painstaking detail the game that announced the Dipper’s greatness. He brings us to Hershey, Pennsylvania, a sweet-seeming model of the gentle, homogeneous small-town America that was fast becoming anachronistic. We see the fans and players, alternately fascinated and confused by Wilt, drawn anxiously into the spectacle. Pomerantz portrays the other legendary figures in this story: the Warriors’ elegant coach Frank McGuire; the beloved, if rumpled, team owner Eddie Gottlieb; and the irreverent p.a. announcer Dave “the Zink” Zinkoff, who handed out free salamis courtside.

At the heart of the book is the self-made Chamberlain, a romantic cosmopolitan who owned a nightclub in Harlem and shrugged off segregation with a bebop cool but harbored every slight deep in his psyche. March 2, 1962, presented the awesome sight of Wilt Chamberlain imposing himself on a world that would diminish him. Wilt, 1962 is not only the dramatic story of a singular basketball game but a meditation on small towns, midcentury America, and one of the most intriguing figures in the pantheon of sports heroes.

Gary M. Pomerantz earned acclaim with his two previous books. Where Peachtree Meets Sweet Auburn, a multigenerational biography of Atlanta and its racial conscience, was named a 1996 Notable Book of the Year by the New York Times. Nine Minutes, Twenty Seconds (2001), the true story of an airplane crash, has been published in Britain, Germany, and China. A graduate of the University of California, Berkeley, Pomerantz worked for nearly two decades as a journalist, first as a sportswriter for the Washington Post and then writing columns, editorials, and special projects for the Atlanta Journal-Constitution. He later served for two years as Distinguished Visiting Professor of Journalism at Emory University in Atlanta. He lives today in the San Francisco Bay Area with his wife and their three children.

“Gary Pomerantz’s Wilt, 1962 is beautifully written, well reported, and compelling. But what’s so special about this book, what causes it to linger, is the atmosphere that Pomerantz has captured through his words, so bittersweet and haunting. You love Wilt Chamberlain. You feel the aura of his isolation as he towered above the rest of us in life, and you wish more than ever he was still around because of his very individuality.” —H. G. “Buzz” Bissinger, author of Friday Night Lights

“In his undeniable excellence and egotism, Wilt Chamberlain was America itself, inspiring worship, ambivalence, and downright awe.” —Philadelphia Inquirer

“Genius is in the details, and Gary Pomerantz’s Wilt, 1962 proves that.” —John Feinstein, author of A Season on the Brink and A Good Walk Spoiled

“Meticulously researched and superbly crafted, Wilt, 1962 revisits and vividly re-creates a seminal but overlooked moment in American sports history. On that transformative evening in Hershey, Pennsylvania, Wilt Chamberlain scored one hundred points and staked a black man’s claim to the city game. In Gary Pomerantz’s deft possession-by-possession retelling, Chamberlain soars again. The gangly, uncompromising seven-footer who always seemed too big for the uniform he inhabited thunders back to life.” —Jane Leavy, author of Sandy Koufax: A Lefty’s Legacy

“Wilt, 1962 is not only a lively sports story about the record-setting performance of a larger-than-life athlete, it is also a wonderful chronicle of urban and social history, replete with colorful characters and situations from a bygone era of professional basketball, when the game changed from being dominated by white stars to being dominated by black ones.” —Gerald L. Early, author of This Is Where I Came In: Black America in the 1960s

“In this age of instant everything, few people have any idea who Wilt Chamberlain really was and what he meant to sports. Gary Pomerantz shows us. In Wilt, 1962 he puts us courtside for one of the greatest unexamined moments in sports history, the night Wilt scored one hundred points. In a sweet return to his sportswriting roots, Pomerantz gives us Wilt in his realm, his rise to prominence and dominance, set against the backdrop of the NBA’s coming of age. It’s all irresistible.” —Michael Wilbon, cohost of ESPN’s Pardon the Interruption