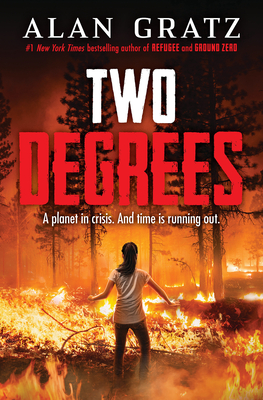 #1 New York Times bestselling author Alan Gratz (Refugee; Ground Zero) is back, tackling the urgent topic of climate change in this breathtaking, action-packed novel that will keep readers turning pages while making their own plans to better the world.

Four kids fighting for their lives.

Akira is riding her horse in the California woods when a wildfire sparks--and grows scarily fast. How can she make it to safety when there are flames everywhere?

Owen and his best friend, George, are used to seeing polar bears on the snowy Canadian tundra. But when one bear gets way too close for comfort, do the boys have any chance of surviving?

Natalie hunkers down at home as a massive hurricane barrels toward Miami. When the floodwaters crash into her house, Natalie is dragged out into the storm--with nowhere to hide.

Akira, Owen, George, and Natalie are all swept up in the devastating effects of climate change. They are also connected in ways that will shock them--and could alter their destinies forever.

Bestselling author Alan Gratz is at the top of his game, shining a light on our increasingly urgent climate crisis while spinning an action-packed story that will keep readers hooked--and inspire them to take action.

Alan Gratz is the #1 New York Times bestselling author of several highly acclaimed books for young readers, including Ground Zero, Allies, Grenade,Refugee, Projekt 1065, Prisoner B-3087, and Code of Honor. Alan lives in North Carolina with his wife and daughter. Look for him online at alangratz.com.

A Barnes & Noble Best Book of the Year

An Amazon Best Book of the Month

"A Hollywood thriller of a book...essential for this moment." -- The New York Times

"Gratz renders pulse-pounding ecological tales and high-stakes calamity with the brisk pacing of a thriller...gripping [and] timely." -- Publishers Weekly

* "The plot starts at a heart-pounding pace and never relents... In a superbly structured plot, the two protagonists experience similar perils, and both respond with determination and hope... A contemporary history lesson with the uplifting message that humanity's survival depends on us working for, not against, one another. A must-have." -- School Library Journal, starred review

* "The pace is quick (don't blink or you'll miss something!), its emotions deeply authentic, and the highly visual settings resonate with accuracy. With a moving author's note, pertinent back matter, and a surprise twist which brings the book full circle, Gratz delivers another winning read." -- Booklist, starred review

"Gratz's deeply moving writing paints vivid images of the loss and fear of those who lived through the trauma of 9/11." -- Kirkus Reviews

* "Told by both young men, the story is gripping from start to finish as each encounters ambushes, engages in battles and experiences their devastating aftermath, and mourns the plight of innocent civilians caught in the middle. Impossible to put down, the story unapologetically demonstrates how war affects people emotionally and physically. . . . Action fans will have this flying off the shelves." -- Booklist, starred review

"The plot is suspenseful and the characters sympathetic." -- Horn Book

"Intense and fast-paced, this is a compelling, dark, yet ultimately heartening wartime story." -- Kirkus Reviews

"Gratz (Refugee) depicts the events and fallout of WWII's 'Love Day' while exploring the emotional and cultural damages of war." -- Publishers Weekly

"The book illustrates the horrors of war and the narrators' dual realization that the enemy is a person, too. This is a sad and compelling story that sheds some light on a battle that is rarely mentioned in books written for juvenile readers. . . . Highly Recommended." -- School Library Connection

An Amazon Best Book of the Year

A Kirkus Best Book of the Year

"A gripping, visceral, and hold-your-breath intense story." -- John Green, #1 New York Times bestselling author of The Fault in Our Stars

* "Gratz accomplishes a feat that is nothing short of brilliant, offering a skillfully wrought narrative laced with global and intergenerational reverberations that signal hope for the future... Poignant, respectful, and historically accurate while pulsating with emotional turmoil, adventure, and suspense." -- Kirkus Reviews, starred review

* "[A] hard-hitting novel... Filled with both tragic loss and ample evidence of resilience, these memorable and tightly plotted stories contextualize and give voice to current refugee crises, underscoring that these journeys are born out of a desperate need for security and safety." -- Publishers Weekly, starred review

"Gratz, who is known for well-written and well-researched historical fiction, doesn't disappoint. His latest is timely and moving... This compelling novel will help young people make sense of today's refugee crisis. Meant to be read, discussed, and shared widely." -- School Library Journal

"This heart-stopping novel is not only compelling -- it is necessary." -- Judy Blundell, National Book Award-winning author of What I Saw and How I Lied

"Full of struggle, heroism, and non-stop adventure, Refugee is not only an important book, it's a terrific story." -- Kimberly Brubaker Bradley, author of the New York Times bestseller and Newbery Honor Book The War That Saved My Life

"Powerful and compelling. Refugee is a story about what unites us all." -- Christina Diaz Gonzalez, award-winning author of Moving Target

* "While the book is replete with fascinating historical insight, Gratz has also crafted a suspenseful mystery that will keep readers on the edge of their seats. With short, action-packed chapters, it is a great choice for reluctant readers as well... A winning combination of action, suspense, and historical setting." -- School Library Journal, starred review

Praise for Code of Honor:

"Readers will be swept up by both the intrigue and the rapid pacing... Kamran is a smart and sympathetic narrator, and readers will be happy to spend time with him in this action-packed thriller." -- Kirkus Reviews

"Exciting, at times ripped from the headlines, and scary, this cinematic work has layers of intrigue and danger in each scene... will appeal to a variety of readers and will raise questions about patriotism, loyalty, and trust... A winner." -- School Library Journal

"Vivid characters and timely topics, such as posttraumatic stress disorder, contribute to making Code of Honor a first-rate novel." -- Voice of Youth Advocates

"A bone-chilling tale not to be ignored." -- Kirkus Reviews

"Gratz ably conveys... fatalism, yearning, and determination in the face of the unimaginable." -- Publishers Weekly

"Heartbreaking, gripping, raw, and emotional... storytelling at its finest." -- Voice of Youth Advocates