The Race of the Century: The Battle to Break the Four-Minute Mile (Scholastic Focus) (Hardcover) 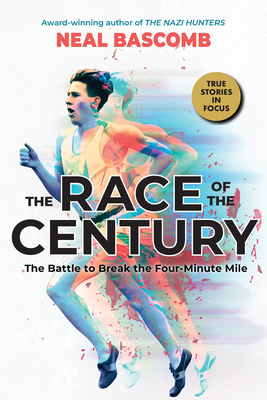 Highly acclaimed author Neal Bascomb brings his peerless research and fast-paced narrative style to a young adult adaptation of one of his most successful adult books of all time, The Perfect Mile, an inspiring and moving story of three men racing to achieve the impossible -- the perfect four-minute mile.

There was a time when running the mile in four minutes was believed to be beyond the limits of human foot speed. In 1952, after suffering defeat at the Helsinki Olympics, three world-class runners each set out to break this barrier: Roger Bannister was a young English medical student who epitomized the ideal of the amateur; John Landy the privileged son of a genteel Australian family; and Wes Santee the swaggering American, a Kansas farm boy and natural athlete.

Spanning three continents and defying the odds, these athletes' collective quest captivated the world. Neal Bascomb's bestselling adult account adapted for young readers delivers a breathtaking story of unlikely heroes and leaves us with a lasting portrait of the twilight years of the golden age of sport.

Praise for The Racers:

* "Bascomb excels at launching the reader along famous racecourses, such as the Circuit de Monaco and the Nürburgring, palpably describing the pressures felt by the drivers both literally and emotionally Though geared toward car and racing enthusiasts, this book will enthrall any with a passing curiosity in those subjects or history lovers who enjoy an underdog tale. Period photos and posters, plus an extensive bibliography, fortify this impressive speed read." -- Booklist, starred review

"Bascomb is adept at interweaving historical, biographical, and heart-pounding sports threads into a compulsive whole, in which Hitler and hubris get their comeuppance, and for a brief moment in 1938 before World War II fully detonates, Nazis are bested. With plenty of period illustrations and a fascinating author's note on Bascomb's joyride in a Delahaye 145, as well as bibliography, source notes, and index, this promises broad crossover appeal for teens and adults, history and sports buffs, engineering enthusiasts, and of course, anyone mesmerized by Ford v Ferrari." -- Bulletin for the Center of the Study of Children's Books

"Bascomb takes a complex, nuanced story and shapes a fascinating narrative that keeps pace with the speed of the track A great read for all fans of the sport, or anyone looking for a little catharsis." -- Jewish Boston

"The perfect book for race-car-loving WWII buffs Bascomb provides readers with a unique insight into the time period, focusing on a subject that is often overlooked in the history books What makes this book so extraordinary is how it implicitly explores the connection between manufacturing and politics So well-researched You'll learn much from this distinctly interesting angle on one of the most well-written periods in history." -- Paperback Paris

Praise for The Grand Escape:

* "Bascomb does an extraordinary job of bringing the principal escapees to life His account of the Herculean task of digging the tunnel is fascinating, viscerally evoking the claustrophobic act. He also invests his account with page-turning suspense and colorful detail. The narrative is enhanced by the inclusion of generous period photographs and contemporary maps and charts. Altogether the book is a marvel of research and an example of narrative nonfiction at its finest. It's a grand adventure." -- Booklist, starred review

* "Suspenseful reading, enhanced by diagrams and photographs. A fine escapade related with proper drama and likely to be news even to well-read young historians." -- Kirkus Reviews, starred review

* "It is a tale of triumph that became a template for future prisoners of war, and Bascomb's heavy, well-cited research provides the information readers need A fantastic pick for avid history readers." -- School Library Journal, starred review

"Plenty of photographs put faces to the escapees, and diagrams and maps illuminate the prison layout, tunnel, and destinations for border crossing. An introductory 'List of Participants' is handy for reader review, and sources notes, bibliography, and index direct readers pursuing research. This, however, is a real-life thriller that's too compelling to relegate merely to World War I report writers." -- Bulletin of the Center for Children's Books

* "Bascomb is a master of taking complicated histories and turning them into exciting works of nonfiction This excellent treatise on a little-known episode of World War II is a first choice." -- School Library Journal, starred review

"This is an exciting and impeccably researched story of science, spies, and commando raids -- page-turning nonfiction at its best." -- Steve Sheinkin, Newbery Honor-winning author of Bomb: The Race to Build -- and Steal -- the World's Most Dangerous Weapon

"Bascomb's detailed narrative builds tension through each attempt, narrow escape, and comeback vivid descriptions of the principal participants and their motivations, rigors of Norway's climate and terrain, and the risks calculated (and those unforeseen), producing a gripping account of individual and collective heroic effort." -- Publishers Weekly

"The book is enhanced by impressive supplemental material, including a helpful list of participants, photographs, maps, and an intriguing author's note. A rich, well-paced narrative." -- Kirkus Reviews

"Bascomb admirably balances dramatic tension and context throughout Sabotage will find its place in a growing body of narrative nonfiction centering on military and political history." -- Horn Book

"Bascomb's clear-eyed account, helped along by photos, maps, and diagrams, of the thrilling mission and its many challenges will handily engage teens." -- Booklist

Praise and Awards for The Nazi Hunters:

Winner of the YALSA Excellence in Nonfiction Award

Winner of the Sydney Taylor Book Award for Teen Readers

"The Nazi Hunters is a fabulously exciting piece of history that teens should know about -- and now they will! Bascomb's detailed scenes allow readers to live through this true tale of courage and daring as if they were there." -- Deborah Heiligman, Printz Honor-winning author of Charles and Emma and Intentions

"I found The Nazi Hunters riveting, from its suspenseful search for Eichmann to the capture of the war criminal responsible for orchestrating the murder of eleven million people, including six million Jews. Neal Bascomb's book is incredibly well-researched and paced like an espionage thriller. The hunters' commitment to bringing Eichmann to justice is sure to captivate readers." -- Susan Campbell Bartoletti, Newbery Honor-winning author of Hitler Youth: Growing Up in Hitler's Shadow and The Boy Who Dared

"From cafés in Buenos Aires to the halls of the fledgling Israeli government, from false identities to secret drops, this story has all the hallmarks of a spy novel. Bascomb has a knack for turning complex detail into a suspenseful, heart-pounding narrative." -- School Library Journal

"Photographs are included throughout the text, adding not just to the evidence of Eichmann's guilt but to the reader's sense of being along on the mission." -- The Horn Book Magazine

"Tension rises from the pages, thanks to Bascomb's command of pacing, judicious use of quoted material, inclusion of archival photographs and strong descriptions." -- Kirkus Reviews