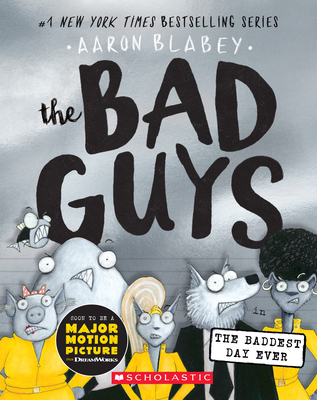 By Aaron Blabey
$5.99
ON HAND in at least ONE of our stores. Click through or call for up-to-the-minute availability.

This is book number 10 in the The Bad Guys series.

They may look like Bad Guys, but these wannabe heroes are doing good deeds... whether you like it or not! This New York Times bestselling illustrated series is perfect for fans of Dog Man and Captain Underpants.

All hail Crown Prince Marmalade! Surrender to his evil magnificence! Kneel before his butt-handed glory! Or...like...DON'T! The Bad Guys and even Badder Girls might have been knocked down, but does that mean they'll stay down? No way, chicos! Pull on your party pants-it's the ultimate battle between Bad and BAAAAAAD!

AARON BLABEY has written many well-loved, bestselling books for children. He is the creator of three hugely successful series for children -- the New York Times bestselling The Bad Guys, Pig the Pug, and Thelma the Unicorn. In 2018, it was announced that a movie adaptation of The Bad Guys is in development at DreamWorks Animation with Aaron serving as an executive producer on the project. Aaron's books have won many awards, including nine REAL Awards, an INDIE Book Award for Children's Book of the Year, a Children's Book Council of Australia -- Book of the Year Award, a NSW Premiers Literary Award for Children's Literature, two Australian Book Design Awards, and a Children's Peace Literature Award.