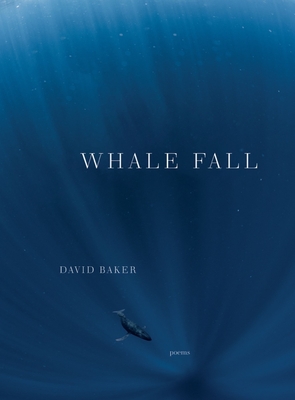 A masterful and moving new volume from a “peerless poet of the natural world” (New York Times Book Review).

Acclaimed as an essential voice of the American Midwest, David Baker expands both his environment and his form in his eleventh collection. Whale Fall is about time, measured in the wingbeats of a hummingbird or the epochs of geological change, and about place, whether a backyard in Ohio or the slopes of a melting glacier.

In the exquisite, musical title poem, a deft hybrid of eco-poetic alarm and intimate narrative, Baker transports us to the deep sea as a single gray whale carcass falls, decays, and is reinhabited by a cosmos of teeming lives. Among the strands of ocean health, microplastics, and related calamities of human disregard, the poet weaves in a personal story of chronic illness. The result is a stirring, confident work, astonishing in its emotional acuity and lyric range.

Each poem in Whale Fall is an echolocation, emitting its music to situate itself among others in the vastness of the world. Amidst climate change and catastrophe, as amidst a blooming viburnum or a viral disease, these poems send their songs across empty spaces of a line, a page, or a continent, to see who is out there, moving in the depths of being.

David Baker’s many honors include fellowships and awards from the Poetry Society of America, the National Endowment for the Arts, and the Guggenheim Foundation. The recipient of the Theodore Roethke Memorial Poetry Prize, Baker teaches at Denison University and lives in Granville, Ohio.

The craft of Whale Fall defies. It asserts, for me, a definition of poetry: an unbearable gulf of feeling made indelible by form.

[Baker] locates his experiences in an understanding of the natural world that is both scientific and transcendent.
— Ron Charles - Washington Post Book Club

Baker’s 12th volume of poetry finds him in a wistful, elegiac mood, paying witness to the shared frailties of the natural world and the aging, ailing speaker.
— New York Times Book Review

One of the collection’s many achievements, however, is that [its] density of reference never lands heavily. Whale Fall contains voices that fragment and shift pace, but never loses sight of a lyricism so reliable that it feels instinctual... In 2001, [Baker] wrote of 'the moral harmony of nature.' Whale Fall might be the collection that refines and refinds that harmony for the Anthropocene, in which acid rain and microplastics and handholding in a tree are all part of the same music.

From the shadow of the garfish to the memory of seabed in Ohio sandstone, nothing appears to be too slight or too immense for David Baker’s powers of lyric transformation. In book after eloquent book, his artistry has become more purely his own: pared down to essentials while refining its scope of generous inclusion. Baker’s method, like his subject, is the fine pulse of human encounter: here in its most distillate manifestation.
— Linda Gregerson

As a book of ecopoetry, it could quickly slide into the merely catastrophic—because, these days, what else could it be?—but somehow, even as it elegizes, Baker’s Whale Fall also cultivates our attention to the marvelous... [G]orgeous [and] mesmerizing.

Whale Fall is divided into five numerated sections, notable for their variance, expansiveness, and sumptuous orchestration. I read this book as one absorbs a symphony, attending the lavish feast of sound and motion with its multiple instruments and silences. The poet knows his orchestra, and he brings every technique to bear on this composition.

A virtuoso of eco-poetry and acoustics, Baker meditates on the nonpareil majesty of the planet with rigorous consideration and reverence... Baker’s careful, captivating writing sinks under the skin, summoning a long-forgotten need for stillness, wonder, and attention to the sacrosanctity of the world.
— Publishers Weekly