The Plover: A Novel (Hardcover) 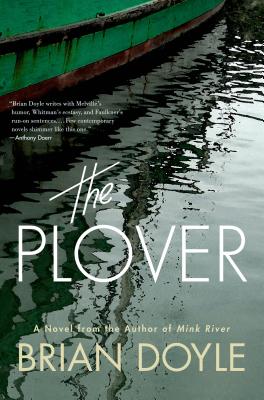 I am not generally one to be drawn to novels that can be described as "magical" or "mystical," and especially not "feel-good," but all of those words can be applied to The Plover,  along with "salty," and even "brilliant." The Plover is the simple story of a man getting onto his little boat and heading out to sea to escape the world, but the world follows him out and keeps him company.  It is a beautiful novel filled with extraordinary characters who will carry you away on a journey of solitude, of mysticism and exploration. Books like this don't come along very often, so dive in and enjoy each pleasant surprise.

Declan O Donnell has sailed out of Oregon and deep into the vast, wild ocean, having had just finally enough of other people and their problems. He will go it alone, he will be his own country, he will be beholden to and beloved of no one. No man is an island, my butt, he thinks. I am that very man. . . .

But the galaxy soon presents him with a string of odd, entertaining, and dangerous passengers, who become companions of every sort and stripe. The Plover is the story of their adventures and misadventures in the immense blue country one of their company calls Pacifica. Hounded by a mysterious enemy, reluctantly acquiring one new resident after another, Declan O Donnell's lonely boat is eventually crammed with humor, argument, tension, and a resident herring gull.

Brian Doyle's The Plover is a sea novel, a maritime adventure, the story of a cold man melting, a compendium of small miracles, an elegy to Edmund Burke, a watery quest, a battle at sea---and a rapturous, heartfelt celebration of life's surprising paths, planned and unplanned.

BRIAN DOYLE (1956-2017) was the longtime editor of Portland Magazine at the University of Portland, in Oregon. He was the author of six collections of essays, two nonfiction books, two collections of “proems,” the short story collection Bin Laden’s Bald Spot, the novella Cat’s Foot, and the novels Mink River, The Plover, and Martin Marten. He is also the editor of several anthologies, including Ho`olaule`a, a collection of writing about the Pacific islands.

Doyle’s books have seven times been finalists for the Oregon Book Award, and his essays have appeared in The Atlantic Monthly, Harper’s, Orion, The American Scholar, The Sun, The Georgia Review, and in newspapers and magazines around the world, including The New York Times, The Times of London, and The Age (in Australia). His essays have also been reprinted in the annual Best American Essays, Best American Science & Nature Writing, and Best American Spiritual Writing anthologies.

Among various honors for his work is a Catholic Book Award, three Pushcart Prizes, the John Burroughs Award for Nature Essays, Foreword Reviews' Novel of the Year award in 2011, and the Award in Literature from the American Academy of Arts and Letters in 2008 (previous recipients include Saul Bellow, Kurt Vonnegut, Flannery O’Connor, and Mary Oliver).

“The Plover is about beauty, loneliness, the mysteries of the sea, albatrosses, an unforgettable young girl, language, healing, and love. And plenty more. Brian Doyle writes with Melville's humor, Whitman's ecstasy, and Faulkner's run-on sentences; in this book he has somehow unified his considerable talents into an affirming, whimsical, exuberant, and pelagic wonder. Few contemporary novels shimmer like this one.” —Anthony Doerr, author of The Shell Collector

“Brian Doyle has spun a great sea story, filled with apparitions, poetry, thrills, and wisdom. The sweet, buoyant joy under every sentence carried me along and had me cheering. I enjoyed this book enormously.” —Ian Frazier, author of Travels in Siberia

“Board this boat! Here's Doyle at his probing, astonishing, wordslinging best.” —Robin Cody, author of Voyage of a Summer Sun

“Conrad, Stevenson and Jack London come to mind, but so does the magical realism of Gabriel García Márquez. … The Plover sails delightfully on an imaginative sea of insight, compassion and a kind of mystical grace.” —The Seattle Times

“It is Doyle's careful shaping of his characters' internal landscapes that make The Plover so unique. … A novel of wondrous ideas worth mulling over. … What The Plover has on offer is aplenty: big themes -- the search inner peace, a need to be loved, the destruction of our planet -- flanked by small touches, like the reproductions of ocean-themed woodcuts at the opening of each chapter or the bars of music sprinkled throughout the text (if you have an instrument on hand, give those notes a gander).” —The Oregonian

“The Plover alternately reminded me of The Unusual Life of Tristan Smith by Peter Carey, with its crippled main character and fictional country; The Life of Pi by Yann Martel, for strange adventures at sea; Florence and Giles by John Harding, for made-up words; and the works of Gabriel Garcia Marquez for the elements of magical realism. ” —Booksquawk

“Doyle has written a novel in the adventurous style of Jack London and Robert Louis Stevenson but with a gentle mocking of their valorization of the individual as absolute. Readers will enjoy this bracing and euphoric ode to the vastness of the ocean and the unexpectedness of life.” —Library Journal (starred)

“A rare and unusual book and a brilliant, mystical exploration of the human spirit.” —Kirkus Reviews (starred)

“A novel about the sea. It is a rhythmic read. The cadence of the sea and of on-board conversation creates a mosaic of movement. The ocean serves as both protagonist and antagonist. It holds everyone together as it strives to pull everyone apart. It slides through the novel and lulls us into its great heart.” —The Portland Book Review

“The Plover is a fun ride with meaning and heart, lots of it, as well as jokes, scares, storms at sea, surprises, magic, absurdity--and humanity, exuberant joyful humanity.” —Shelf Awareness (starred review)

“I don't know how many all-bird novels are out there, but Doyle could rule the canon. The aviary ensemble of The Plover ('those who have heard it say it has a mournful yet eager sound'), separated from the whole of the narrative, deftly and gracefully drives a stand-alone tale. ... But this is a people story -- it's full of them. They are colorfully introduced, down to the detailed fabric of their being and then often released from the tale, only to be intricately woven back in.” —The Register-Guard

“Wisps of other memorable journey books arise as you sail off with the Plover -- The Odyssey, Cold Mountain, Life Of Pi, Zen And The Art Of Motorcycle Maintenance, The Sparrow -- yet this novel defies comparison as it stands out as a purely original, witty, literary, lyrical, philosophical wonder all by itself. Touching, soul-searching and uplifting, while hilariously profane at the same time, Declan's creative epithets are eloquent and frequent. The Plover touches that seeker of truth and redemption that lives within each of us.” —Bookreporter.com