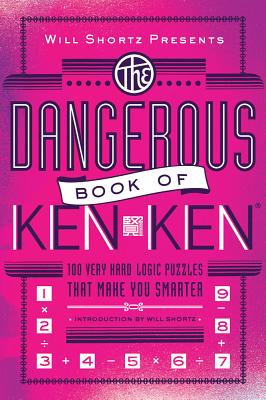 By Will Shortz (Introduction by), Tetsuya Miyamoto, LLC KenKen Puzzle
$16.99
NOT on our shelves now. Usually ships from warehouse in several days.

Puzzle fans have fallen for KenKen and now crave more challenging puzzles. The puzzles in this edition range in size from 6x6 grids to 9x9 grids and for the first time there will also be grids without application symbols. It's the ultimate KenKen challenge!

This edition will also include "How to Solve" instructions and an introduction by puzzlemaster Will Shortz.

Tetsuya Miyamoto, the creator of KenKen, is a math teacher. He developed KenKen to help his student develop their calculation and logic skills. He runs a unique mathematics class for grade school children in Japan where he practices “The Art of Teaching Without Teaching.” His teaching method and use of KenKen in his classroom have proven extremely successful. His students regularly go on to be accepted at the most prestigious schools in Tokyo.

KenKen was developed in 2004 by acclaimed Japanese mathematics instructor Tetsuya Miyamoto. His goal was to improve his students' math and logic skill, so he developed a puzzle that would be understandable, fun, and challenging for any level of student. Most importantly, he wanted the puzzle to encourage independent thinking, emphasizing trial and error, concentration, and perseverance.

His methods and puzzle were immediately successful. It quickly became a favorite leisure activity for all ages throughout Japan and then for millions of players worldwide. In 2008, KenKen came to the United States. Soon, it was the first daily feature since the crossword puzzle to appear in The New York Times.

Whether in the classroom, on the beach, waiting for a bus, standing atop a mountain—anywhere you might be—KenKen is always stimulating your brain. It's the puzzle that makes you smarter!