Cardiac Arrest: A Tactical Guide on How to Handle Unlawful Police Stops (Paperback) 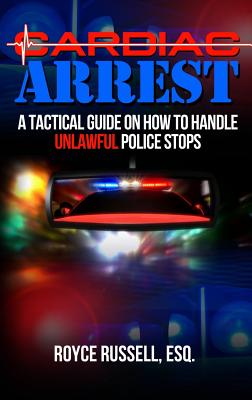 By Esq Royce Russell
$24.99
NOT on our shelves now. Usually ships from warehouse in several days.
(This book cannot be returned nor exchanged.)

As an African-American male with over 2 decades of legal experience, countless hours advocating for clients and witnessing one too many lives lost, Attorney Royce Russell illustrates key ways on how to handle unlawful police stops successfully, in his book Cardiac Arrest. This book will be your tactical guide of the best ways to handle these encounters. This guide was particularly written with young men of color in mind, who are disproportionately victims of unlawful police stops. Nonetheless, anyone one from any background can find themselves a victim on an unlawful police stop. Readers can learn how to mitigate the escalation of these incidents and hopefully make it home alive. The inspiration for this book is his desire to provide a tactical guide for real-time application during unlawful police stops. The objective of this book is for you to Think C.A.L.M.: Stay Composed* Be Aware * Listen *Make a Call

For Royce Russell, being an attorney means being an advocate. Royce specializes in Criminal Defense, False Arrest/Police Brutality (1983 Civil Rights Violations), Immigration, Contracts, Employment Law and Trademark. At Emdin & Russell, LLP, he has represented individuals in Federal and State Court from Criminal Investigations, to Trials, as well as represented victims of Police Brutality/False Arrest (1983 Civil Rights Violations). Most notably, he has represented the family of Ramarley Graham, who at 18 years old, was shot to death by NYPD officers. Dedicated to justice and reform from an early age, once Royce graduated from Hofstra University School of Law he began his practice of the law as an Assistant District Attorney in the Bronx, NY under the first African-American District Attorney, Robert Johnson. DA Johnson's leadership and multifaceted approach to preventing crime through community outreach were invaluable to Royce who has sought to serve and represent those that are so often lost to the justice system.