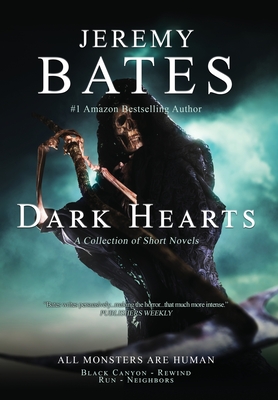 Black Canyon - Black Canyon of the Gunnison National Park in Colorado boasts one of the most beautiful and deepest canyons in the United States. For twelve-year-old Brian Garrett, a weekend camping trip in the park promises to be an opportunity to bond with his aloof parents. But after his father suffers a horrible accident during a hike to the chasm's floor, events spiral quickly out of control, and over the next twenty-four hours Brian will uncover a terrifying dark side to his father--and an even darker side to himself.

Rewind - When a man wakes in a rundown apartment, hooked up to a strange machine, a dead body in the next room, he has no memory of who he is, or what he is doing there. Over the next forty-eight hours, however, as he works to unravel the mystery of his identity, he'll come to realize that he might be one of the most influential people of the twenty-first century--and that some things are better left unknown.

Run - During a camping trip to the Catskill Mountains, Charlotte's boyfriend Luke, a former soldier suffering PTSD, goes on a rampage, nearly killing Charlotte and her two friends. A year later Charlotte is a graduate student in the small college town of Ashenville, North Carolina. Yet her new life is shattered when Luke, recently released from prison, shows up on her doorstep, demanding to get back together. When it becomes clear to Luke that she is no longer interested in him, and she has in fact moved on with a new boyfriend, he vows to kill her. Now, it seems, Charlotte only has one option: Run.

Neighbors - New York is a city of eight million strangers. For twenty-five-year old Buddy Smith, who values his privacy, it's the only place he would call home. Yet his simple life is flipped upside down when a new neighbor moves in next door. She's young, beautiful, a bit nosy...and might just be a cold-blooded killer. Against his better judgment, Buddy spends the night with her--a decision that will prove to be the biggest mistake of his life.