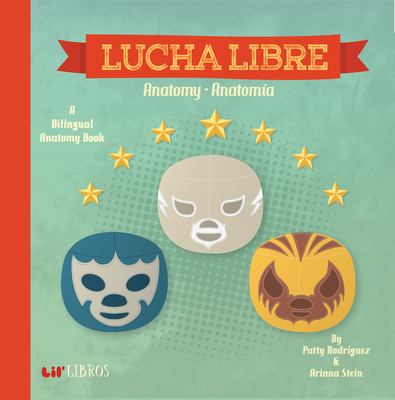 By Patty Rodriguez, Ariana Stein, Citlali Reyes (Illustrator)
$9.99
NOT on our shelves now. Usually ships from warehouse in several days.

Since its debut in 1863, the sport of Lucha Libre has earned the love and respect of millions of people around the world. Inspired by the colorful world of wrestling, this book will introduce children to body parts, and their first English and Spanish words with the help of super heroes with masks and capes

Unable to find bilingual first concept books she could enjoy reading to her baby, Patty Rodriguez came up with the idea behind Lil' Libros.

Patty and her work have been featured in the Los Angeles Times, Rolling Stone, CNN Latino, Latina Magazine, Cosmopolitan, People En Espanol, Cosmo Latina, and American Latino TV, to name a few. She is currently Sr. Producer for On Air With Ryan SeacrestiHeartMedia, jewelry designer for MALA by Patty Rodriguez, and creator of Manolos And Tacos.

Ariana Stein, a graduate from California State University, Dominguez Hills, has a Bachelor's Degree in Business Administration. Ariana spent the first eight years of her professional career in the corporate world. Her life changed with the birth of her baby boy. She immediately realized that bilingualism played a very important role in his future, as well as the future of other children.