Apollo: A Decade of Achievement (Paperback) 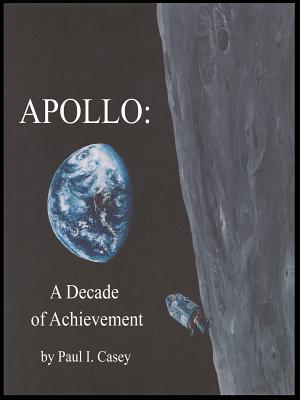 The race for space begins on October 4, 1957 as the Soviet Union stuns the world and launches the first man made satellite - a feat until then only read about in science fiction. America is caught unprepared for 1957 and must answer this embarrassment to the world by proving its superiority; however, each time America tries to launch a satellite - let alone test a new rocket - it fails. -How could America have taken a back seat in the missile race? -How did America take the lead and win the race to the moon in as little as ten years? -How did America gain the necessary technology and ingenuity to not only launch men into outer space, but also land them on the moon and safely return? -Why did man even go to the moon? -How has the space program affected our lives today? Casey spent his life researching the space program and interviewing many people involved in it, from scientists to astronauts, to find answers to these questions. Casey, an accomplished technical writer, astronomy columnist and artist, began to write this book after he was inspired as a young child when he witnessed, along with the rest of the world, Apollo 11 land three men on the moon in 1969. Casey enjoyed educating students about the space program and wrote this book to share an enthusiasm about science, especially for those never thought about looking up at the night sky and wondering about the stars. Casey wanted students to ask questions and to gain a perspective on how incredible science is. But mostly, he wanted to inspire students to pursue a career in science to continue the peaceful exploration of space for generations to come.