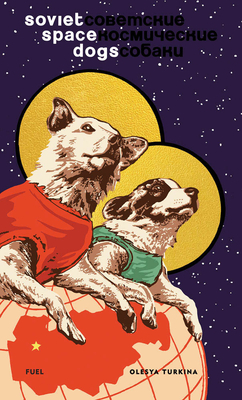 This book is dedicated to the Soviet Space Dogs, who played a crucial part in the Soviet Space program. These homeless dogs, plucked from the streets of Moscow, were selected because they fitted the program's criteria: weighing no more than 15 pounds, measuring no more than 14 inches in length, robust, photogenic and with a calm temperament. These characteristics enabled the dogs to withstand the extensive training that was needed to prepare them for suborbital, then for orbital, space fights. On 3 November 1957, the dog Laika was the first Earth-born creature to enter space, making her instantly famous around the world. She did not return. Her death, a few hours after launching, transformed her into a legendary symbol of sacrifice. Two further strays, Belka and Strelka, were the first beings to make it back from space, and were swiftly immortalized in children's books and cartoons. Images of the Space Dogs proliferated, reproduced on everyday goods across the Soviet Union: cigarette packets, tins of sweets, badges, stamps and postcards all bore their likenesses. Soviet Space Dogs uses these unique items to illustrate the story (in fact and fiction) of how they became fairytale idols. The first book to document these items, it contains more than 350 images, almost all of which are previously unpublished, and many of which have never been seen before outside Russia. The rich and varied ephemera (from cigarette packets to sweet wrappers and children's toys) of Soviet graphics will have immense appeal to the art and design market, as well as appealing to dog-lovers everywhere.