Spacesuit: A History through Fact and Fiction (Hardcover) 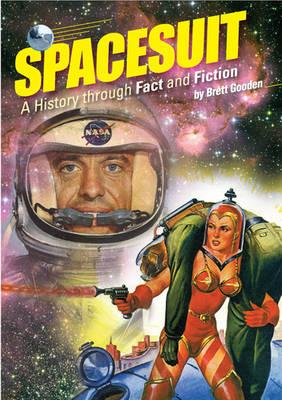 The space suit is an icon of space flight. It is the very symbol of interplanetary exploration - of pioneering adventure, of excitement and danger, and of man's quest to learn more of other worlds.This book follows the remarkable history of the space suit through science fiction and fact. With an absorbing blend of drama and detail, Brett Gooden explains how this seemingly impossible dream gradually evolved into the complex suits of today and how the quest continues for the 'Mars and Beyond' suits of tomorrow.Man has dreamt of flying into space and walking on other planets for hundreds of years. But the risks to the human body involved in making this a reality only were only first recognized when, in the 1800s, an adventurous few climbed high mountains and took the first tentative steps into the sky under hydrogen filled balloons.Gradually it became clear that to leave the earth's atmosphere and gravity, our frail bodies would need protection from many dangers. Jules Verne, in his epic novel Around the Moon in 1872, recognized this need and was one of the first to suggest that some form of suit, similar to that used by deep sea divers, might allow his space voyagers to venture safely into the vacuum outside their spaceship.In the period between the World Wars, daring pilots, competing with each other, ventured higher and higher into the thinner atmosphere. They challenged the physiologists and engineers to provide them with special suits to achieve this goal.At the same time, cheap pulp fiction magazines pumped out colorful adventures of humans in space. Their eye-catching cover illustrations became the archetypical feature of these 'pulps' and allowed artists to give vent to their wildest fantasy. Nevertheless, their inventive dreams for space suits fed back to the scientific community. Fiction influenced fact. Complemented by astonishing and detailed illustrations, this book unlocks the seemingly impenetrable secrets of how the space suit was made into a practical and essential device. How simple everyday items such as the car tire, the caterpillar and the concertina provided critical clues that eventually brought the space suit to reality. This is the fascinating, extraordinary and often bizarre story of the Space suit - through Fact and Fiction.

Dr. Brett Gooden has had a life-long interest in human rocket flight. In 1961 he joined the British Interplanetary Society (UK) and was elected a Fellow of the Society in 1973. In 1967 he became a member of the Space Medicine Branch of the Aerospace Medical Association (USA). He obtained his MB, BS (1967) and MD (1972) degrees from the University of Adelaide and PhD (1978) from the University of Nottringham (UK). He was elected to membership of Signma Xi, the Scientific Research Society (USA) in 1973 and the Physiological Society (UK) in 1975. His scientific research in Australia, USA, and UK has dealt mainly with aerospace and diving medicine. His publications include one of the first reviews of the physiological responses of human beings in orbit, appearing in Spaceflight in 1964 and other apsects of human space flight. His fascination with the relationship between structure and function also lead to his studies in the remarkable adaptations of the Australian spiny anteater, the echidna.