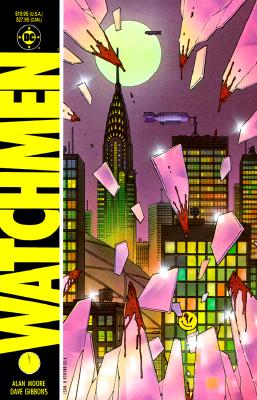 By Alan Moore, Dave Gibbons, Barry Marx (Editor)
Not available to order
Stock uncertain--should fulfill within 10 days or so

“What Alan Moore crafted in the late 1980s unarguably catapulted the graphic novel to the forefront of pop culture and contemporary literature. Employing a deconstructed superhero persona, a comic within a comic, and a brutally honest commentary on American optimism, Moore gave rise to something exceedingly greater than the sum of its parts.”
— Katie Capaldi, McLean & Eakin Booksellers, Petoskey, MI

“Watchmen is not only the best graphic novel out there, but also one of the most brilliantly conceived and executed pieces of fiction I've ever encountered. Two decades of history -- from the end of WWII to the depths of the Cold War -- memoirs of former hero crusaders, interviews, psychiatric documents, and scientific memoranda intersperse the story panels and add a level of complexity and meta-textual mold-breaking unmatched before or since.”
— Grant, DIESEL, A Bookstore, Oakland, CA

A "New York Times" Best Seller
This Hugo Award-winning graphic novel chronicles the fall from grace of a group of super-heroes plagued by all-too-human failings. Along the way, the concept of the super-hero is dissected as the heroes are stalked by an unknown assassin.
One of the most influential graphic novels of all time and a perennial bestseller, WATCHMEN has been studied on college campuses across the nation and is considered a gateway title, leading readers to other graphic novels such as V FOR VENDETTA, BATMAN: THE DARK KNIGHT RETURNS and THE SANDMAN series.

Alan Moore is perhaps the most acclaimed writer in the graphic story medium, having garnered countless awards for works such as WATCHMEN, V FOR VENDETTA, SWAMP THING and Miracleman. He is also the mastermind behind the America's Best Comics line, through which he has created (along with many talented illustrators) THE LEAGUE OF EXTRAORDINARY GENTLEMEN, PROMETHEA, TOM STRONG, TOMORROW STORIES and TOP TEN. As one of the medium's most important innovators since the early 1980s, Moore has influenced an entire generation of comics creators, and his work continues to inspire an ever-growing audience.

"A work of ruthless psychological realism, it’s a landmark in the graphic novel medium. It would be a masterpiece in any."
–TIME, TIME MAGAZINE’s 100 best English-language novels from 1923 to the present