Something Will Happen, You'll See (Paperback) 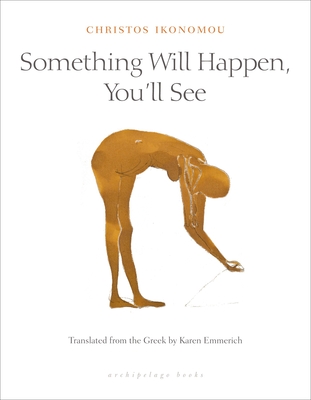 Ikonomou’s stories convey the plight of those worst affected by the Greek economic crisis—laid-off workers, hungry children. In the urban sprawl between Athens and Piraeus, the narratives roam restlessly through the impoverished working-class quarters located off the tourist routes.

Everyone is dreaming of escape: to the mountains, to an island or a palatial estate, into a Hans Christian Andersen story world. What are they fleeing? The old woes—gossip, watchful neighbors, the oppression and indifference of the rich—now made infinitely worse. In Ikonomou’s concrete streets, the rain is always looming, the politicians’ slogans are ignored, and the police remain a violent, threatening presence offstage. Yet even at the edge of destitution, his men and women act for themselves, trying to preserve what little solidarity remains in a deeply atomized society, and in one way or another finding their own voice. There is faith here, deep faith—though little or none in those who habitually ask for it.

Karen Emmerich's translations from the Greek include books by Margarita Karapanou, Amanda Michalopoulou, Ersi Sotiropoulos, and Vassilis Vassilikos. Her translation of Miltos Sachtouris for Archipelago was nominated for a National Book Critics Circle Award in Poetry, and her translation of Yannis Ritsos's Diaries of Exile with Edmund Keeley won the 2014 PEN Literary Award. She has received translation grants and awards from PEN, the NEH, and the Modern Greek Studies Association. She teaches at the University of Oregon.

“In Ikonomou’s timely novel, the human fallout of the Greek economic recession is writ large. . . . Concerned with the bottom rungs of the social ladder, [these] pieces . . .  cover an astonishing range . . . These stories add up to a panorama of the human spirit under siege and a searing indictment of the failures to reform the Greek infrastructure.”
—Publishers Weekly

“[Ikonomou’s] characters might feel like they are suffering private tragedies, but SOMETHING WILL HAPPEN repeatedly calls our attention to the subtle human connections that remain . . . Karen Emmerich deserves special praise for her translation of Ikonomou’s charming, vernacular, and energetic prose.”
—Bookforum

“This collection is a kind of Dubliners for the postcrisis generation and a lament for the marginalized inhabitants of neighborhoods around the shipping district of Piraeus. Ikonomou succeeds at immersing the reader, through a panoramic stream-of-consciousness method of narration, into fifteen lives where “pain and fear come later, when the wound cools . . . Ikonomou is an author of substance as much as style, and Something Will Happen, You’ll See is a stunning, if somewhat bleak, sketch of a country in flux.”
—World Literature Today

“Ikonomou’s Something Will Happen, You’ll See depicts many lives, of all ages, that have been blighted by financial hardship. The book stands with Rafael Chirbes’s On the Edge as one of the remarkable literary interpretations of the recent global downturn.”
—Barnes & Noble Review

“Stylistically and thematically reminiscent of Raymond Carver . . . Set in contemporary Greece, these stories focus on characters struggling to maintain their dignity, relationships and self-worth in a failing society.”
—Shelf Awareness

“These stories are pitch-perfect, with sullen anger, wit, sharp humor, and tragicomedy captured in sharply crafted scenes that linger in the memory . . . Karen Emmerich is quickly establishing herself as one of our finest contemporary translators from Greek to English . . . If someone is interested in understanding the very human face of Greece’s working class, and discovering a very talented and unsettling writer, I’d say buy this book.”
—Stephanos Papadopoulos in Los Angeles Review of Books

“Something Will Happen, You'll See presents a vision that deftly combines economic and existential crisis, showing how the two are never far apart . . . Ikonomou’s writing brilliantly and sensitively conveys hope, fear, and everything in between. He realizes that the mind plays games when faced with something it can’t bear to see. Ikonomou forces it, and us, to look. These stories give back to the world what is lost in the TV rendition of a country’s suffering. These fictions are the news, writ atomically, or cellularly, character by character, progressing one gesture and emotional tick at a time. The loss of the individuals behind any news story is a crime. Ikonomou undoes the crime by bodying forth the tragedy.”
—Anne Germanacos in Los Angeles Review of Books

“In sixteen inter-connected short stories, Christos Ikonomou gives us a mural of the lives of people struggling in the working-class neighbourhoods on the outskirts of Athens, the fishing docks and boatyards near the port . . . Karen Emmerich’s outstanding translation makes sure not only that the lyrical and the rough both survive in the English version, but that the austere and the jumbled, elements which form the Modern Greek language, are both present—this is one of those rare renditions where nothing is lost.”
—The Times Literary Supplement

“This poignant collection of short stories masterfully explores the soul of the Greek people amidst economic crisis. The stories are unique and raw and delve deep into the emotional landscape of unemployment, hunger and despair but include fragments of dark humor and attempts at preserving dignity. From a laid off worker who cannot provide food for his son to a woman whose boyfriend steals her nest egg to a group of sick old men awaiting the opening of a clinic, we are privy to the  innermost thoughts and mundane acts of everyday people who are grappling

“A gripping collection of short stories . . . Christos Ikonomou has already been hailed in the Italian press as a 'Greek Faulkner,' a description that conveys the emotional power but not the restraint or precision of his prose.”
—Mark Mazower, The Nation