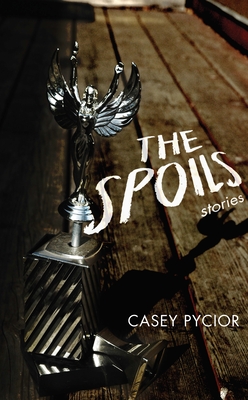 Deep in the landlocked heart of the Midwest, the characters in The Spoils are drowning under the weight of masculinity, paralyzed in the grip of things left unsaid. These men are broken and breaking, struggling to reckon with the decisions they’ve made and those they have yet to face. Set mostly in and around Kansas, the stories in this powerful collection explore how men perform, in their jobs and personal lives, and investigate the gray area between doing what’s best for oneself and acting a part to make others happy.

A man questions whether he should leave his drug-addicted girlfriend and her son or stay, sacrificing his own well-being to be the boy’s father. Fed up with the role of the stooge, a Washington Generals player takes his A-game to the Harlem Globetrotters and has to face the unforeseen consequences. A rookie prison guard sent to procure a death row inmate’s final meal commits a small, subversive act of humanity.

In a world where the line between right and wrong is constantly shifting, some struggle to do the right thing, while others eschew the line altogether and deal with the sometimes violent repercussions. The Spoils examines these difficult choices and will appeal to readers of literary fiction and short stories, especially readers of fiction based in the Midwest.

Casey Pycior was born and raised in Kansas City. He earned his MFA in fiction writing at Wichita State University and his PhD in creative writing at the University of Nebraska–Lincoln. He was awarded the Charles Johnson Fiction Prize at Crab Orchard Review, and his stories have also appeared in Beloit Fiction Journal, Midwestern Gothic, Harpur Palate, BULL, Wigleaf, and Yalobusha Review, among many others. He lives in Lincoln, Nebraska, with his wife and son.

"While many of the conflicts contained in this collection are heavy, the book is light and highly readable thanks to Pycior’s ability to convey lived-in stories with Heartland humanity."
—Necessary Fiction

“I believe honesty and empathy are two of the main qualities fiction writers should always aim for in their work, and Casey Pycior achieves both on nearly every page of his tightly written and compulsively readable collection of stories, The Spoils. I admire them immensely.”
—Donald Ray Pollock, author of The Heavenly Table

“In ‘Preservation,’ a boy who has recently lost his mother visits a museum dedicated to the treasures of a once-sunken Missouri steamboat. His favorite artifact is the walnut tree trunk that brought the ship to ruin. ‘It’s like . . . the snag is the most important thing,’ he tells his father. Casey Pycior’s characters are adrift in a sea of alcohol, drugs, separations, infidelities, and divorces: a carpenter who follows disasters, and is one himself; a tow-truck driver who is a wreck; a live-in surrogate dad who can’t fix his addicted girlfriend, but can fix a faucet at 3 a.m.; a Generals basketball player paid to lose every game to the Harlem Globetrotters. All of them hit a ‘snag,’ and the characters go deep, some desperate and flailing, some resilient and triumphant. In The Spoils, Pycior’s narrations and narrators give us storytelling at its very best—honest and steady, heartfelt and true.”
—Thomas Fox Averill, O. Henry Award winner, author of A Carol Dickens Christmas, rode, and Secrets of the Tsil Café

“These are stories that linger, that come back to haunt. Casey Pycior meticulously renders people and places thrumming with life, tangible creations who bleed and love and lose on these pages—and us, right along with them. In short, The Spoils is a feat of a collection.”
—Robert James Russell, author of New Plains and Mesilla

“Casey Pycior knows the ragtag and the misguided—those folks out here in the Heartland who struggle to make the right choices and with the consequences that result. The stories in “The Spoils” resonate with the complexity of the lived life. They find those moments where people are sometimes noble, sometimes adrift, sometimes imperfect, but always, always unforgettably human.”
—Lee Martin, author of The Bright Forever and Late One Night

“Casey Pycior’s engaging new story collection, The Spoils, will make you want to ‘come with,’ as we say in the Midwest. From an itinerant worker who only thinks the worst of his recent luck will be losing a finger to a basketball player poised to take down an institution, Pycior’s vibrant characters veer in unexpected, exciting directions. His stories are tenderly Midwestern—steeped in funny, idiosyncratic syncopations of dialogue and form—but never simple. These folks lead nuanced lives among the familiar landmarks of local gas stations and Hy-Vee stores and the historic tragedies of their towns. They’re often haunted by their children, but always seeking the courage to do the right thing by them and the waiting world. You should do the right thing, too, and read this impressive debut. Pycior’s a writer bound to stay on the Doppler."
—Darren DeFrain, author of The Salt Palace

“Casey Pycior’s book is a terrific read and an excellent addition to the field of American letters. These stories sneak up on you and pack a wonderful punch. They are grounded in place, which provides unity to this diverse collection, but they are not limited by geography. They speak to the entire country and help us understand what it means to be an American.”
—Andrew Malan Milward, author of I Was a Revolutionary

“If Russell Banks and Elmore Leonard took a long road trip together, brainstorming up a pile of short stories to pass the miles, they might have returned home with a collection like The Spoils. Bad luck, bad timing, bad decisions in cheap motel rooms—these are the building blocks of the toughest pulp fiction…and sometimes the stumbling blocks for Casey Pycior’s indelible, achingly human characters. The people in these stories are as real as we are, each of them somehow refreshingly unique yet utterly recognizable at the same time. Their everyday lives take outlandish turns through ordinary dramas. Their stories don’t conclude, they resonate. Bottom line:  Pycior writes the kind of short stories I most want to read. I loved this book.”
—Sean Doolittle, author of The Cleanup and Lake Country

“Casey Pycior’s debut collection, The Spoils, is one of the best I’ve read in a long time. In tough, unadorned prose, he captures the raw, attenuated lives of the men and women struggling to exist on the fringes of society, economically and socially, isolated as they are in the Midwest. Reminiscent of the best of early Hemingway in the way he examines and imparts depth and meaning to the small gestures of individuals who despite their efforts at connection in love, must continue to exist in the face of the disappointment and loss that is most often their fate. What moves the reader is Pycior’s ability to lay bare the most hidden dreams and elemental desires of his characters, lifting them with the delicate touch of a scalpel opening the chest to reveal the beating heart, partially ruined, but worthy of our care and attention.”
—Jonis Agee, author of The Bones of Paradise and The River Wife

“Casey Pycior writes like he’s Ray Carver’s bastard son, lost in the Midwest, in the rundown industrial neighborhoods of Kansas City, in the farms outside Lincoln, Nebraska, on the front porches turning scoliotic with rot. Pycior writes a 21st-century form of dirty realism, where each Percocet is a hard blessing and even victory feels like a loss. I’d say this is a kick-ass collection, but The Spoils is too somber for that. This book will bum you out, leave you as spent as Pycior’s protagonists. If that doesn’t seem like praise, you better believe it is.”
—Daniel A. Hoyt, author of Then We Saw the Flames

“These sharp, intuitive stories by Casey Pycior depict characters at key moments of realization—making for extraordinary moments of conflict and redemption. These are stories about good people who frequently fall just short of (or far from) their best behavior, and the tensions are at times heartbreaking and at times comic, and always startlingly, stunningly real.”
—Timothy Schaffert, author of The Swan Gondola

“The Spoils is a gritty and addictive debut, a wild ride of ill-fated grifts and characters attempting to shrug off their bad luck with even worse choices. Pycior’s stories crackle with wit and humanity and are an absolute pleasure.”
—John Jodzio, author of Knockout and If You Lived Here You’d Already Be Home

“Casey Pycior writes stories you won’t soon forget. This fine collection features an arresting cast of characters down on their luck, money, and themselves. Still, they continue to search for peace, redemption, or the smallest victory. Thankfully, whether the characters win or lose, we are rewarded by each character’s memorable, emotional journey. To the reader goes The Spoils.”
—Cote Smith, author of Hurt People

“Casey Pycior’s collection The Spoils contains an achingly observed collection of characters, scrabbling for their dreams on the edges of the Great Plains. These strivers often leave blood and treachery in their wake, but Pycior’s strength is the intricate craftsmanship he employs to illuminate each soul. Think Tobias Wolff in Wichita, or William Trevor in Kansas City—but above all, read this book and discover its remarkable pleasures for yourself. I did, and I think The Spoils announces a thrilling new voice in American fiction.
—Whitney Terrell, author of The Good Lieutenant