The Missing Ink: The Lost Art of Handwriting (Paperback) 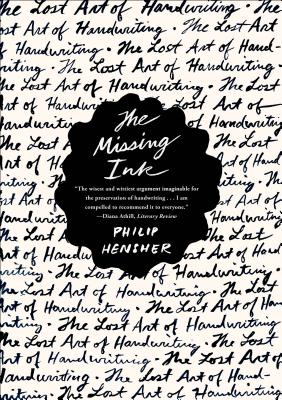 The loop of an "l," the chewed-on pen, letters tiny or expansive: what we've lost in the error of typing and texting

When Philip Hensher realized that he didn't know what a close friend's handwriting looked like, he felt that something essential was missing from their friendship. It dawned on him that having abandoned pen and paper for keyboards, we have lost one of the ways by which we come to recognize and know another person: handwriting.
The Missing Ink tells the story of this endangered art. Hensher introduces us to the nineteenth-century handwriting evangelists who traveled across America to convert the masses to the moral worth of copperplate script; he examines the role handwriting plays in the novels of Charles Dickens; he investigates the claims made by the practitioners of graphology that penmanship can reveal personality.
But this is also a celebration of the physical act of writing: the treasured fountain pens, chewable ballpoints, and personal embellishments that we stand to lose. Hensher pays tribute to the warmth and personality of the handwritten love note, postcards sent home, and daily diary entries. With the teaching of handwriting now required in only five states and many expert typists barely able to hold a pen, the future of handwriting is in jeopardy. Or is it? Hugely entertaining, witty, and thought-provoking, The Missing Ink will inspire readers to pick up a pen and write.

Philip Hensher is a columnist for The Independent, an arts critic for The Spectator, and one of Granta’s Best of Young British Novelists. He has written one collection of short stories, a book on handwriting called The Missing Ink, and eight novels, including The Mulberry Empire, King of the Badgers, and The Northern Clemency, which was shortlisted for the Man Booker Prize. He lives in South London and Geneva.

“An ode to a dying form: part lament, part obituary, part sentimental rallying cry . . . Eloquent . . . There remains something wonderful about receiving a letter that has been physically touched--actually crafted--by the hands of your correspondent.” —Julia Turner, Slate

“We all communicate, of course (tweet tweet tweet, and yack yack yack on the mobile), but not by pen and ink. Does it matter? I didn't have to read 274 pages to be persuaded that it does, but I am very glad indeed that those pages were written and that I have read them. From this book, the wisest and wittiest argument imaginable for the preservation of handwriting, I have learnt so much, and by it have been so happily entertained, that I am compelled to recommend it to everyone.” —Diana Athill, The Literary Review