Kitchen Gypsy: Recipes and Stories from a Lifelong Romance with Food (Sunset) (Hardcover) 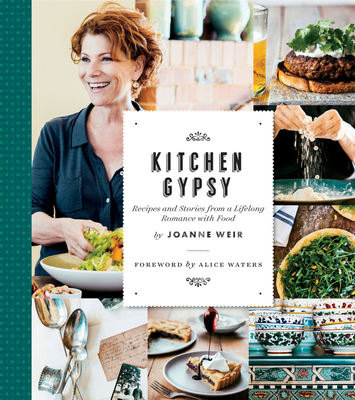 By Joanne Weir, Alice Waters (Foreword by)
$38.50
NOT on our shelves now. Usually ships from warehouse in several days.

From the beloved host and producer of PBS series Joanne Weir's Cooking Confidence and Joanne Weir Gets Fresh.
"Joanne's infectious enthusiasm...draws readers effortlessly into a new and beautiful relationship to food." - Alice Waters
Chef, cooking instructor, and PBS television host Joanne Weir has inspired legions of home cooks with her signature California-Mediterranean cuisine and warm, engaging style. In Kitchen Gypsy, the James Beard Award-winning author offers a taste of the people, places, and flavors that have inspired her throughout the years.
With refreshing honesty and humor, Joanne shares the spark that led to her love of cooking, how she learned to taste and develop a palate, the meal that would forever change her life, her years working with Alice Waters at Chez Panisse during the beginning of the farm-to-table movement, and her continued travels teaching cooking classes the world over.
Throughout, she offers the cherished dishes and lessons that have shaped her culinary journey, from the 140-year-old Lighting Cake recipe handed down from her great-grandmother to the luxurious Beef Roulade with Mushrooms and Garlic perfected during her Master Chef training in France, and the approachable, globally-inspired dishes, like Fried Pork Belly Tacos and Autumn Salad with Figs and Pomegranate, that have made her a favorite of home cooks.
Lushly illustrated with full-color photographs, Kitchen Gypsy is both an inspirational cooking resource and an armchair read, offering recipes made to be shared and savored against the colorful backdrop of Weir's evocative writing.

Joanne Weir is a James Beard Award-winning cookbook author, international cooking teacher and chef. In her award-winning PBS series, "Joanne Weir's Cooking Class," "Joanne Weir's Cooking Confidence" and her new series "Joanne Weir Gets Fresh", Joanne's love of teaching students how to cook is shared with a national TV audience. In 2012, Weir opened Copita, a critically-acclaimed Mexican restaurant and tequileria in Sausalito, California. She launched her online wine business, Joanne Weir Wines in 2011, garnering medals in Sunset's International Wine Competition. She is the author of 17 cookbooks, 10 of which were created in collaboration with Williams-Sonoma. Joanne has been featured on numerous television shows including The Today Show and Good Morning America, and writes for many national magazines including Cooking Light, Bon Appétit, Better Homes and Gardens, Food & Wine, AARP The Magazine and Sunset Magazine. She spends several months of the year touring the globe sharing her extensive knowledge and love of food. Among her many honors Joanne was one of 20 American women chefs appointed to the American Chef Corp whose assignment is to promote world relations through food. She won the Julia Child IACP Cooking Teacher Award of Excellence as well as Tour Operator of the Year Award from the IACP for her highly acclaimed Culinary Journeys.