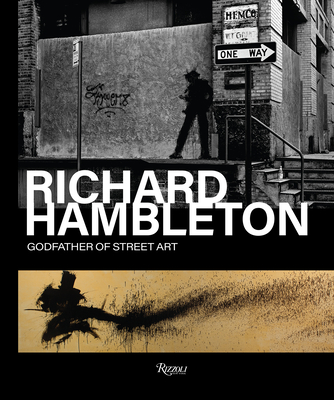 The first definitive career retrospective of the visionary underground godfather of street art at the center of New York’s 1980s urban art scene.

Richard Hambleton (1954–2017) was a Canadian artist known for his pioneering street art. He was a surviving member of a group that emerged from the New York City art scene during the booming art market of the 1980s, which also included his close friends Keith Haring and Jean-Michel Basquiat.

As a conceptual artist, Hambleton’s early work instal-lations titled “Image Mass Murder” from 1976–1979 were secretly placed onto streets in over 15 cities, depicting chalk-body outlines and blood-splattered crime scenes of what appeared to be “victims.” This theme of a prevailing violence, fear, and morbid curiosity elicited surprise and anxiety from its unsuspecting viewers. In the early 1980s, Hambleton created his most iconic “Shadow Man” works—artfully splattered ominous shadowy figures on unexpected street corners, walls, and alleys that startled viewers into a visceral awareness that the city was still a dangerous place.

This book features over 200 images including his early “Shadow Man” canvas paintings, as well as photographs of his in situ street work, a selection of his “Marlboro” rodeo horse silhouettes, and his “Beautiful Paintings” series of landscapes and seascapes, alongside other works on paper; behind-the-scenes studio shots; personal, unseen photographs of the artist; and inspirational imagery. Hambleton was renowned for influencing artists such as Banksy, Blek le Rat, and Shepard Fairey. This arresting, one-of-a-kind book will appeal to those interested in visual arts, street art, graffiti, and art history.