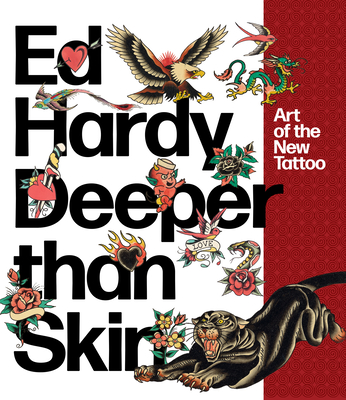 Legendary American tattoo artist Ed Hardy's groundbreaking tattoos, flash, drawings, and artworks are gathered together for the first time in one brash book.

Ed Hardy's (b. 1945) unique vision spans decades, creating an indelible mark on popular culture. Accompanying a major exhibition, this profusely illustrated survey of his life in art traces his inspirations, rooted both in traditional American tattooing of the first half of the twentieth century and in the imagery of Japan's ukiyo-e era. Hardy, raised in Southern California, became intrigued with tattoo art at the age of ten, setting up shop in his parents' den. After attending the San Francisco Art Institute in the 1960s, he rejected a graduate fellowship from Yale to apprentice at studios up and down the West Coast. It was his intention to rescue tattooing from its subculture, "outsider" status and elevate it to at least the level of folk art.

Hardy's success at breathing new life into the art form is chronicled in a plethora of tattoo designs, paintings, drawings, prints, and three-dimensional work spanning fifty years. While the world that inspires him may be lost, Hardy's distinct visual language is vibrantly alive within American visual vernacular, synonymous to some with the spirit of the West Coast itself.

Karin Breuer is the curator in charge of the Achenbach Foundation of Graphic Arts at the Fine Arts Museums of San Francisco.
Sherry Fowler is an art historian specializing in Japanese Buddhist art at the University of Kansas.
Jeff Gunderson is librarian and archivist at the San Francisco Art Institute.
Don Ed Hardy is a legend in the tattoo world.
Joel Selvin is a San Francisco-based music critic and author.