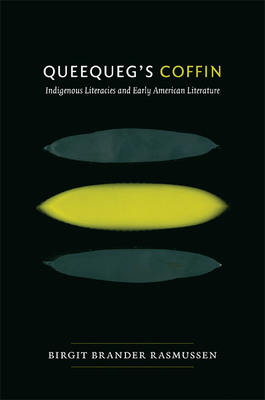 The encounter between European and native peoples in the Americas is often portrayed as a conflict between literate civilization and illiterate savagery. That perception ignores the many indigenous forms of writing that were not alphabet-based, such as Mayan pictoglyphs, Iroquois wampum, Ojibwe birch-bark scrolls, and Incan quipus. Queequeg's Coffin offers a new definition of writing that comprehends the dazzling diversity of literature in the Americas before and after European arrivals. This groundbreaking study recovers previously overlooked moments of textual reciprocity in the colonial sphere, from a 1645 French-Haudenosaunee Peace Council to Herman Melville's youthful encounters with Polynesian hieroglyphics.

By recovering the literatures and textual practices that were indigenous to the Americas, Birgit Brander Rasmussen reimagines the colonial conflict as one organized by alternative but equally rich forms of literacy. From central Mexico to the northeastern shores of North America, in the Andes and across the American continents, indigenous peoples and European newcomers engaged each other in dialogues about ways of writing and recording knowledge. In Queequeg's Coffin, such exchanges become the foundation for a new kind of early American literary studies.

Birgit Brander Rasmussen is Assistant Professor of American Studies and Ethnicity, Race & Migration at Yale University. She is coeditor of The Making and Unmaking of Whiteness, also published by Duke University Press.