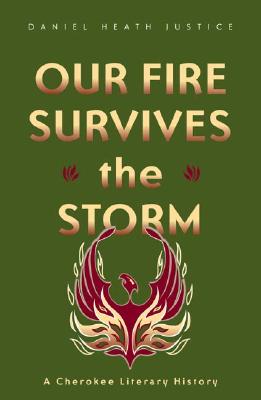 Once the most powerful indigenous nation in the southeastern United States, the Cherokees survive and thrive as a people nearly two centuries after the Trail of Tears and a hundred years after the allotment of Indian Territory. In Our Fire Survives the Storm, Daniel Heath Justice traces the expression of Cherokee identity in that nation’s literary tradition.

Through cycles of war and peace, resistance and assimilation, trauma and regeneration, Cherokees have long debated what it means to be Cherokee through protest writings, memoirs, fiction, and retellings of traditional stories. Justice employs the Chickamauga consciousness of resistance and Beloved Path of engagement—theoretical approaches that have emerged out of Cherokee social history—to interpret diverse texts composed in English, a language embraced by many as a tool of both access and defiance.

Justice’s analysis ultimately locates the Cherokees as a people of many perspectives, many bloods, mingled into a collective sense of nationhood. Just as the oral traditions of the Cherokee people reflect the living realities and concerns of those who share them, Justice concludes, so too is their literary tradition a textual testament to Cherokee endurance and vitality.

Daniel Heath Justice is assistant professor of aboriginal literatures at the University of Toronto.