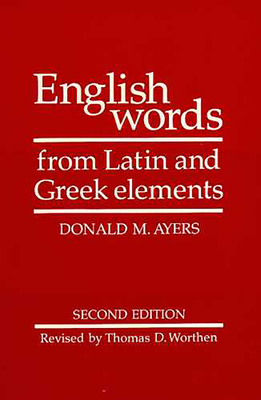 Since 1965, Donald Ayers' English Words from Latin and Greek Elements has helped thousands of students to a broader vocabulary by showing them how to recognize classical roots in modern English words. Its second edition, published in 1986, has confirmed that vocabulary is best taught by root, not rote. The importance of learning classical word roots is already acknowledged by vocabulary texts that devote chapters to them.

Why a whole book based on this approach? Ayers' text exposes students to a wider range of roots, introduces new English words in context sentences, and reinforces vocabulary through exercises. It promotes more practice with roots so that students learn to use them as tools in their everyday encounters with new words. English Words is written from the standpoint of English; it neither attempts to teach students Latin or Greek nor expects a knowledge of classical languages on the part of instructors. Its success has been demonstrated at both the secondary and college levels, and it can be used effectively with students in remedial or accelerated programs.

An Instructor's Manual (gratis with adoption) and a Workbook are also available.

Donald M. Ayers received both his B.A. and M.A. in classics from Stanford University and his doctorate in classics from Princeton. One of his special concerns was the classical background of the English vocabulary and the value of a knowledge of this in vocabulary building for both technical and general studies. He taught classics at Vanderbilt University before joining the Classics Department at the University of Arizona in 1951. He was also a graduate of Navy Japanese Language School (Boulder, Colorado) and was on active duty with the U.S. Naval Reserve for three years. He published several articles on technical terminology in addition to his book Bioscientific Terminology, published by the University of Arizona Press in 1972.

Owing to Dr. Ayers’s untimely death in 1969, the revision of this book became incumbent upon Thomas D. Worthen, who received his M.A. and Ph.D. in classics from the University of Washington and has been teaching classics at the University of Arizona since 1965. R.L. Cherry is the author of the Instructor’s Manual that accompanies this textbook.

"A book like [this] is evidently necessary in a time in which our education has slid down to a level nobody would have thought possible about half a century ago."—General Linguistics