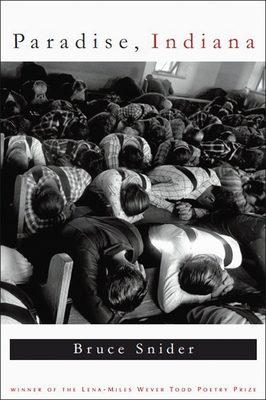 A father and son shovel snow from a driveway; a boy accidentally sets himself on fire; two boys fish for bluegill; a young drag queen returns home to die. At the center of it all, a teenage boy's suicide resonates through the lives of those closest to him. The poems in Bruce Snider's Paradise, Indiana describe a place where mundane events neighbor the most harrowing.
Shaped by the author's experiences growing up in rural Indiana, Snider investigates the landscapes traditionally claimed by male poets such as James Wright, James Dickey, and Richard Hugo, whose visions of place rarely, if ever, included the presence of gays and lesbians. Paradise, Indiana envisions a seldom recorded rural America, one where everything exists side by side: the county fair and an abandoned small town gay bar, farmers and cross-dressers, death and hope, beauty and despair.

Bruce Snider's first book, The Year We Studied Women, won the Felix Pollak Prize in Poetry. His work has appeared in the American Poetry Review, Ploughshares, PN Review, and Gettysburg Review. Originally from Indiana, he was a Wallace Stegner fellow and Jones Lecturer at Stanford University, and has been writer-in-residence at both the James Merrill House and Amy Clampitt House. He currently lives in San Francisco.