American Indians and the Fight for Equal Voting Rights (Paperback) 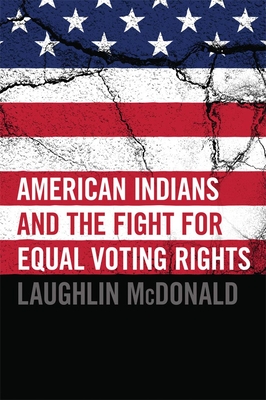 Recounting Indians' progress in the voting booth The struggle for voting rights was not limited to African Americans in the South. American Indians also faced discrimination at the polls and still do today. This book explores their fight for equal voting rights and carefully documents how non-Indian officials have tried to maintain dominance over Native peoples despite the rights they are guaranteed as American citizens. Laughlin McDonald has participated in numerous lawsuits brought on behalf of Native Americans in Montana, Colorado, Nebraska, South Dakota, and Wyoming. This litigation challenged discriminatory election practices such as at-large elections, redistricting plans crafted to dilute voting strength, unfounded allegations of election fraud on reservations, burdensome identification and registration requirements, lack of language assistance, and noncompliance with the Voting Rights Act. McDonald devotes special attention to the VRA and its amendments, whose protections are central to realizing the goal of equal political participation. McDonald describes past and present-day discrimination against Indians, including land seizures, destruction of bison herds, attempts to eradicate Native language and culture, and efforts to remove and in some cases even exterminate tribes. Because of such treatment, he argues, Indians suffer a severely depressed socioeconomic status, voting is sharply polarized along racial lines, and tribes are isolated and lack meaningful interaction with non-Indians in communities bordering reservations. Far more than a record of litigation, American Indians and the Fight for Equal Voting Rights paints a broad picture of Indian political participation by incorporating expert reports, legislative histories, newspaper accounts, government archives, and hundreds of interviews with tribal members. This in-depth study of Indian voting rights recounts the extraordinary progress American Indians have made and looks toward a more just future. Laughlin McDonald is Director of the Voting Rights Project of the American Civil Liberties Union. He is the author of numerous books and articles on voting rights policy, including A Voting Rights Odyssey: Black Enfranchisement in Georgia.