How Should a Person Be?: A Novel from Life (Hardcover) 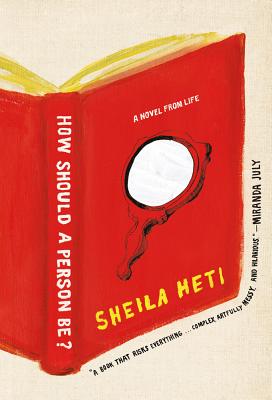 A raw, startling, genre-defying novel of friendship, sex, and love in the new millennium—a compulsive read that's like "spending a day with your new best friend" (Bookforum)

Reeling from a failed marriage, Sheila, a twentysomething playwright, finds herself unsure of how to live and create. When Margaux, a talented painter and free spirit, and Israel, a sexy and depraved artist, enter her life, Sheila hopes that through close—sometimes too close—observation of her new friend, her new lover, and herself, she might regain her footing in art and life.

Using transcribed conversations, real emails, plus heavy doses of fiction, the brilliant and always innovative Sheila Heti crafts a work that is part literary novel, part self-help manual, and part bawdy confessional. It's a totally shameless and dynamic exploration into the way we live now, which breathes fresh wisdom into the eternal questions: What is the sincerest way to love? What kind of person should you be?

Sheila Heti is the author of several books of fiction and nonfiction, including How Should a Person Be? which was a New York Times Notable Book and was named a best book of the year by The New Yorker. She is co-editor of the New York Times bestseller Women in Clothes, and is the former Interviews Editor for The Believer magazine. Her work has been published in The New York Times, The London Review of Books, The Paris Review, McSweeney's, Harper's, and n+1.

“Ms. Heti's deadpan, naked voice is what makes Sheila's journey so engaging… [Her] mordant take on modernity encourages introspection. It is easy to see why a book on the anxiety of celebrity has turned the author into one herself.” —The Economist

“Funny…odd, original, and nearly unclassifiable…Sheila Heti does know something about how many of us, right now, experience the world, and she has gotten that knowledge down on paper, in a form unlike any other novel I can think of.” —David Haglund, The New York Times Book Review

“[Sheila Heti] has an appealing restlessness, a curiosity about new forms, and an attractive freedom from pretentiousness or cant…How Should a Person Be? offers a vital and funny picture of the excitements and longueurs of trying to be a young creator in a free, late-capitalist Western City…This talented writer may well have identified a central dialectic of twenty-first-century postmodern being.” —James Wood, The New Yorker

“Brutally honest and stylistically inventive, cerebral and sexy, this ‘novel from life' employs a grab bag of literary forms and narrative styles on its search for the truth…meandering and entertaining exploration of the big questions, rousting aesthetic, moral, religious and ethical concerns most novels wouldn't touch.” —Michael David Lukas, San Francisco Chronicle

“A perfect summer read. It is also one of the bravest, strangest, most original novels I've read this year…We care about Sheila's plight, but the souls in limbo here are, ultimately, our own. With so many references to the world outside of the fiction, this novel demands to know: Can art inform our lives, and tell us how to be?” —Christopher Boucher, The Boston Globe

“It's a bawdy, idiosyncratic novel about art, sex, Toronto, female friendship, and the endless quest to learn how to live. The title makes me quake with envy. All good books should be called just that.” —Chad Harbach, Entertainment Weekly's "Hey, what are you reading?"

“How Should a Person Be? teeters between youthful pretension and irony in ways that are as old as Flaubert's Sentimental Education. . . but Ms. Heti manages to give Sheila's struggle a contemporary and particular feel. . . How Should a Person Be? reveals a talented young voice of a still inchoate generation.” —Kay Hymowitz, The Wall Street Journal

“I read this eccentric book in one sitting, amazed, disgusted, intrigued, sometimes titillated I'll admit to that, but always in awe of this new Toronto writer who seems to be channeling Henry Miller one minute and Joan Didion the next. Heti's book is pretty ugly fiction, accent on the pretty.” —Alan Cheuse, NPR's All Things Considered

“Not the kind of book that comes along often. It's highly quotable, funny, shocking, anxiety-inducing and, finally, inspiring… It is undeniably of the moment, a blueprint of how to be lost in the Internet Age.” —Thought Catalog

“Heti's book is so boldly original, each sentence so gorgeously rendered, that the distinction between exceptional novel and exceptional memoir seems irrelevant” —Michael Schaub, NPR Books

“Heti knows what she’s doing—much of the pleasure of How Should a Person Be? comes from watching her control the norms she’s subverting.” —Michelle Dean, Slate

“[A] really amazing metafiction-meets-nonfiction novel that's so funny and strange. It has a lot of the same concerns that Girls does.” —Lena Dunham, Entertainment Weekly's "Stars Own Must List"

“[A] breakthrough novel...Just as Mary McCarthy's The Company She Keeps (written at the same age) was an explosive and thrilling rejoinder to the serious, male coming-of-age saga exemplified during her era by Sartre's The Age of Reason, Heti's book exuberantly appropriates the same, otherwise tired genre to encompass female experience. How Should a Person Be?'s deft, picaresque construction, which lightly-but-devastatingly parodies the mores of Toronto's art scene, has more in common with Don Quixote than with Lena Dunham's HBO series "Girls" or the fatuous blogs and social media it will, due to its use of constructed reality, inevitably be compared with…Like [Kathy] Acker, [Heti] is a brilliant, original thinker and an engaging writer. ” —Chris Kraus, LA Review of Books

“If you're not already reading Sheila Heti's second novel How Should A Person Be?, you should be. Heti's rousing, unapologetically messy, beautifully written, insightful and provocative book explores the frustrations and rewards of female friendship, and of trying to make art as a young woman in the 21st century. . . Heti is doing something very exciting within the form of the novel.” —Jezebel

“Enlightening, profoundly intelligent, and charming to read. . . . It reflects life in its incredible humor—and in some of its weird bits that might be muddled or unclear . . . with anxiety, hilarity and lots of great conversation.” —Interview Magazine

“There are no convenient epiphanies in Sheila Heti's newest book How Should a Person Be? Instead there are several intertwined, grinding and brilliantly uncomfortable ones that require the reader to shed a few dozen layers in the service of self-discovery. . . She may depart from broad harbors, but she is an analytic zealot, never imparting trite one-liners or excusing herself. Reading her is an act of participation, discomfort and joy.” —SF Weekly

“Lena Dunham loves this novel…A fresh spin on friendship, art, sex, and philosophy in five acts. And the prose, often taking the form of a numbered list, is always engaging.” —Daily Candy

“[Heti creates] one of the most personable antiheroes ever… Her tone can be earnest and eager to please, flippant and crass, terribly lucid and darkly funny… Her tortured self-deprecation can read a little like Violette Leduc's, and her poetic bluntness sometimes reminds me of Eileen Myles, but these authors come to mind mostly because, like Heti, they have written about women with unusual detail and feeling. Heti truly has a startling voice all her own, and a fresh take on fiction and autobiography's overlap.” —Bookforum

“A new kind of book and new kind of person. A book that risks everything--shatters every rule we women try to follow in order to be taken seriously--and thus is nothing less than groundbreaking: in form, sexually, relationally and as a major literary work. With this complex, artfully messy and hilarious novel, Heti has done the rare and generous thing of creating more room for the rest of us. This is how a person should be.” —Miranda July, author of No One Belongs Here More Than You and It Chooses You

“Oh crap. I don't know how to begin talking about Sheila Heti or how good she is. People will say How Should A Person Be? is reminiscent of Patti Smith's Just Kids or Ann Patchett's Truth & Beauty and both of these things will be true. But I am still reeling from the originality of this novel. There are passages here so striking, to read them is to be punched in the heart.” —Sloane Crosley, author of How Did You Get This Number

“A seriously strange but funny plunge into the quest for authenticity.” —Margaret Atwood, @MargaretAtwood

“The book's form is fluid and unpredictable… [and] the architecture gives the prose a circular, easy feeling, even though Heti is taking a hard look at what makes life meaningful and how one doesn't end up loveless and lost. It is book peopled by twentysomethings but works easily as a manual for anyone who happens to have run into a spiritual wall.” —Sasha Frere-Jones, The Paris Review

“[A]n unforgettable book: intellectually exacting, unsettling in its fragility, bodily as anything painted by Freud, experimental yet crafted as hell, and yes, very funny.” —The National Post

“Sheila Heti's novel-from-life, How Should a Person Be?, was published in Canada in 2010, but won't be out in the US until next June. Watch for it – it's great.” —Chad Harbach, author of The Art of Fielding

“Original, contemplative, and often tangential, this is an unorthodox compilation of colorful characters, friendship, and sex that provides an unusual answer to Heti's [titular] question.” —Publishers Weekly