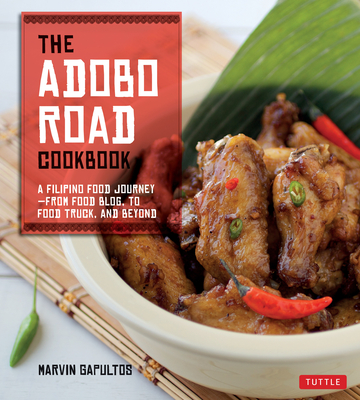 This is a colorful crash course in Filipino cooking, with everything from classic chicken adobo to modern twists like squash and long bean risotto. Marvin] creates a book that he hopes will spark a new and lasting interest in Filipino food and culture.--Food Network blog In The Adobo Road Cookbook, Marvin Gapultos, a food blogger-turned-gourmet food trucker, brings the exotic--yet easy to make--flavors of the Philippines into your home with this beautiful Filipino Cookbook. With a distinct lack of Filipino restaurants to be found, the road to tasty Filipino food begins and ends at home. In his debut cookbook, Marvin demonstrates that Filipino cuisine can be prepared in any kitchen--from Manila to Los Angeles and everywhere in-between. Marvin interprets traditional Filipino flavors with equal parts kitchen savvy and street smarts--providing easy-to-follow, tried-and-true recipes that serve as a guide to the pleasures of Filipino cooking. The nearly 100 recipes in these pages pave a culinary road trip that transports home cooks to the roadside food stalls, bars and home kitchens of the Philippines, to the hungry streets of L.A., and even into the kitchens of Marvin's grandmother, mother and aunties. A highly personal take on traditional Filipino cooking, The Adobo Road Cookbook boasts a tantalizing mix of native Filipino flavors, as well as influences from Spain, Mexico, China, and the U.S. From chapters featuring surefire entertaining foods like Filipino bar food, street food and cocktails to a complete section of adobo recipes, both traditional and with a twist, the recipes found in The Adobo Road Cookbook express Marvin's unique approach to cooking. All of his recipes emphasize their authentic Filipino roots, taking advantage of traditional island flavors for which the Philippines is rightly renowned. Original Filipino recipes include:

Marvin Gapultos is the writer of the celebrated food blog, Burnt Lumpia, and was the founder of Los Angeles' first gourmet Filipino food truck, The Manila Machine. Marvin has been a pioneer in the growing popularity of Filipino cuisine. Because of his contemporary take on traditional Filipino food, The Manila Machine gained both a loyal following, as well as critical acclaim, in just a short amount of time. Using his knowledge and experience with Filipino ingredients and flavors, Marvin not only developed the menu for his mobile restaurant, but he was also responsible for cooking the food. Marvin's singular passion and focus on the food of the Philippines has made him a sought-after expert and authority on Filipino cuisine. Since shutting down The Manila Machine in 2011, Marvin spends his time as a food and marketing writer. He lives with his wife and son in Southern California.

"If this creative take on an Ilocano classic is any indication of the quality of content tucked between the pages of The Adobo Road Cookbook, then I'll be coming back to this cookbook for further inspiration with fervor, and you should follow suit"—YumSugar.com

"Nose-to-tail cooking, funky fermented ingredients and pickled—everything. Filipino food has all the trappings of the next big 'it-cuisine' in the United States restaurant scene. Yet unlike Korean, Thai or Vietnamese food, most Americans would probably be hard-pressed to name or describe even one Filipino dish. Marvin Gapultos is on a mission to change all that with his new cookbook The Adobo Road Cookbook. …His food truck experiment [Manila Machine] lasted less than a year but made a major impact on the local restaurant scene. Its closure devastated loyal fans which is why Gapultos' new cookbook will seem like a lifeline to Angelenos still grieving the loss two years later."—Huffington Post

"Here's one way to light up a weeknight meal—and possibly smoke up your kitchen: A small amount of flambTed bourbon
lends a certain and definite something to the pan sauce for this stove-top steak. The fiery technique burns off just enough of the liquor's edge while leaving behind complex flavor."—Washington Post

"But the most interesting creations happen when Gapultos explores the dense multiethnic heritage of the Philippines, as well as that of his own family. Using adobo, an essential vinegar sauce influenced by both Spain and China, Gapultos features both a classic pork belly-and-pineapple adobo, and a new-wave chicken adobo potpie. It's a delectable way of paying homage and looking forward at the same time."—TastingTable.com

"Rather than exotic and difficult, the recipes are surprisingly easy. To help those tackling Filipino food for the first time, Gapultos provides a guide to ingredients and utensils that includes photos and brand names. The cover shows the carabao wings, a tongue-in-cheek variation on buffalo wings (carabao is the Filipino water buffalo). Like the other photos in the book, it's professional and attractive. And, surprise, Gapultos took the photos himself, although he had to master a complex camera and learn food styling from scratch. He's done so well, you practically want to eat the page with the photo of his oven-baked sweet potato fries."—LA Weekly

"This ain't yo Grandma's meatloaf, it's much better. Created by Marvin Gapultos, mastermind behind the Filipino food blog, Burnt Lumpia, this recipe can be found in his new cookbook, The Adobo Road Cookbook: A Filipino Food Journey-From Food Blog, to Food Truck, and Beyond."—FoodBeast.com

"Marvin Gapultos, the L.A. local exploring Filipino food through his blog, Burnt Lumpia, and in a brief stint from his lauded food truck, The Manila Machine, released a cookbook yesterday called The Adobo Road Cookbook. The product of two years of hard work, with the intention of preserving family and roadside recipes, Adobo Road offers 99 recipes broken down into starters and bar snacks, noodles and soups, authentic and modern entrees including sinigang, lumpia, and pinakbet, as well as an assortment of adobos, vintage cocktails, and sweet stuff."—Grub Street Los Angeles

"And now he has collected his recipes in The Adobo Road Cookbook, an accessible, personal primer on this distinctive and unusual cuisine."—Star-Ledger