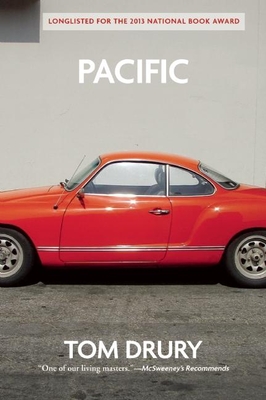 "Reading Pacific makes me once again fall in love with Drury's words, and his perception of a world that is full of dangers and passions and mysteries and graces."--Yiyun Li In Pacific, Tom Drury revisits the community of Grouse County, the setting of his landmark debut, The End of Vandalism. When fourteen-year-old Micah Darling travels to Los Angeles to reunite with the mother who abandoned him seven years ago, he finds himself out of his league in a land of magical freedom. Back in the Midwest, an ethereal young woman comes to Stone City on a mission that will unsettle the lives of everyone she meets--including Micah's half-sister, Lyris, and his father, Tiny, a petty thief. An investigation into the stranger's identity uncovers a darkly disturbed life, as parallel narratives of the comic and tragic, the mysterious and quotidian, unfold in both the country and the city.

Tom Drury is also the author of The End of Vandalism, Hunts in Dreams, The Driftless Area, and The Black Brook. His fiction has appeared in The New Yorker, Harper's Magazine, and The Mississippi Review, and he has been named one of Granta's "Best Young American Novelists."