The Eye of the World: The Graphic Novel, Volume Six (Wheel of Time Other #6) (Hardcover) 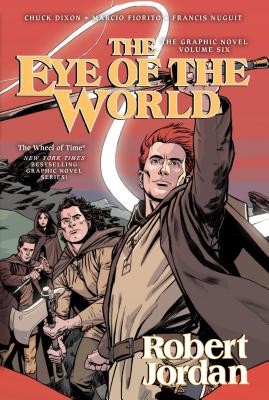 Rand al'Thor and his companions—his old friends from Emond's Field; the brave warrior Lan Mandragoran; and Moiraine, the mysterious and powerful Aes Sedai—have at last been reunited. Their journey in search of the Eye of the World nears its climax as they dare the otherworldly Ways, guided by an Ogier, Loial, and narrowly escape the menace of the soul-stealing Machin Shin. When the group reaches the realm of the Green Man, they believe themselves safe. But two of the Forsaken are waiting for them, ready to attack and to guide their dark lord, Ba'alzamon, to the ones he has been seeking!

When the three young men left Emond's Field, they were untried blades. Their long journey has stolen much of their innocence and made them seasoned warriors, given them powers and gifts they did not seek and are still learning how to use. But not until the final moments are they sure which of them the Dark One intends to claim…and whether that one is strong enough to fight back and survive.

Chuck Dixon is a comic book writer best known for his long runs on several Batman titles in the 1990’s for DC Comics. Throughout his prolific career, Dixon has written for Evangeline (Comico Comics), The Savage Sword of Conan, The Punisher War Journal (Marvel Comics), Robin, Nightwing, Detective Comics (DC Comics), and Simpsons Comics (Bongo Comics). Dixon worked closely with Robert Jordan on the graphic adaptation of New Spring and with Jordan’s estate on The Eye of the World graphic novel.

ANDIE TONG has worked on Spectacular Spider-Man, Batman Strikes, Teenage Mutant Ninja Turtles, and Noble Causes. He has illustrated many comics and graphic novels, including The Eye of the World: The Graphic Novel, Volume Two.

“Dixon and Conley are operating at an extremely high level, making superb storytelling choices not only within the confines of a single issue but when considering the series as a whole. Dixon's pacing is impeccable and his narration bang on. Conley's astounding, atmospheric artwork only reinforces Dixon's narrative framework. This series continues to impress with its strong storytelling and respectful treatment of Jordan's source material. Arguably one of the best comic book adaptations on the shelves today, The Eye of the World is quickly proving itself to be a series of craftsmanship and heart.” —Broken Frontier on The Eye of the World: the graphic novel, Volume One

“The series should provide fans of the novels with an enjoyable take on an old favorite and possibly introduce new readers to this fantasy classic.” —The Jersey Journal on The Eye of the World comic book

“The story feels like it was intended for the comic-book medium. That is probably in no small way due to Chuck Dixon's hand in this. I hope there are more such top-flight comic-book adaptations of popular fantasy series in the offing.” —ComicCritique on New Spring: the graphic novel