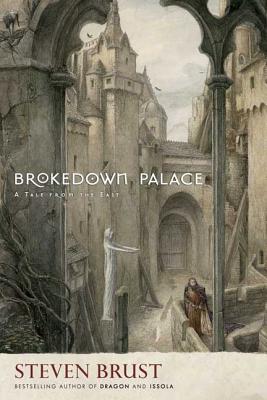 This is book number 1 in the Dragaera series.

Brokedown Palace is a stand-alone fantasy in the world of Steven Brust's bestselling Vlad Taltos novels.

Once upon a time…far to the East of the Dragaeran Empire, four brothers ruled in Fenario:

Once upon a time there were four brothers—and a goddess, a wizard, an enigmatic talking stallion, a very hungry dragon—and a crumbling, broken-down palace with hungry jhereg circling overhead. And then…

STEVEN BRUST is the author of a number of bestselling fantasy novels, including two New York Times bestsellers, Dzur and Tiassa. He lives in Minneapolis, Minnesota.

“Brust is an indubitable master of swashbuckling high fantasy.” —Booklist on Five Hundred Years After


“Watch Steven Brust. He's good. He moves fast. He surprises you. Watching him untangle the diverse threads of intrigue, honor, character and mayhem from amid the gears of a world as intricately constructed as a Swiss watch is a rare pleasure.” —Roger Zelazny on Steven Brust

“Delightful, exciting and sometimes brilliant, Steven Brust is the latest in a line of great Hungarian writers, which (I have no doubt) includes Alexandre Dumas, C. S. Forester, Mark Twain, and the author of the juciest bits of the Old Testament.” —Neil Gaiman on Steven Brust