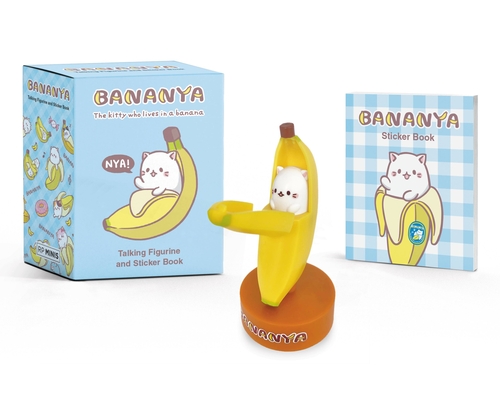 By Crunchyroll
$12.95
NOT on our shelves now. Usually ships from warehouse in several days.

Anime's cutest kitty is going mini with this one-of-a-kind Bananya collectible based on the hit Crunchyroll show!

The kitty who lives in a banana can now live in your home or office with this collectible talking Bananya figurine. Peel open the banana to reveal Bananya inside and hear him say "Nya!" or display for a little added kawaii-flair. This miniature kit includes:

After having studied illustration in college Akiyo Nagano found employment in 2003 with Q-LiA, a design firm that specializes in stationery items with a focus on cute characters. There she's been entrenched in the development of countless characters and properties. In 2014, Nagano developed the BANANYA character, and it was promptly implemented for domestic merchandising. In 2016, BANANYA was developed into an anime series with Nagano helming all character design work. She is now retired from her position as a full-time illustrator and spends her time working on Bananya-related manga and other publications for children. She lives in Osaka, Japan.
Crunchyroll, the world's most popular anime brand, connects anime and manga fans across 200+ countries and territories with 360-degree experiences.