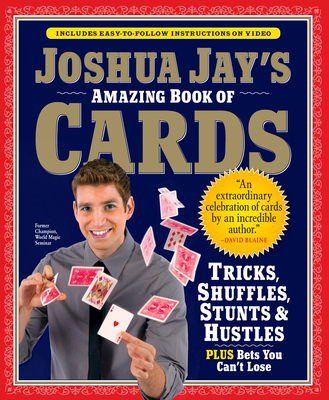 By Joshua Jay
$16.95
NOT on our shelves now. Usually ships from warehouse in several days.

At last, learn how to do all those showy tricks and flourishes - including step-by-step instruction and downloadable video!
Send a deck of cards cascading from one hand to the other. Throw a card across the room. Predict the card even before your spectator chooses it! Morph a "prince" card into a frog - that really hops. Using concise, easy-to-follow directions and step-by-step photographs, award-winning magician Joshua Jay shows how to do 58 truly amazing things with a deck of cards.

As you read through the lessons in the book, refer to the online series of lively videos that demonstrate and teach 29 featured tricks and stunts, plus one bonus effect!

Tricks include Ribbon Spread and Flip, One-Handed Cut, Catch-a-Deck, Faro Shuffle, The Double Bridge, False Cut,  Tearing a Deck in Half, Memorizing a Deck, Fortune Telling, and Stepping Through a Card.

Joshua Jay has performed on stages in more than 100 countries. He is a headliner at Hollywood's Magic Castle and a former World Champion in Sleight-of-Hand. He is the author of MAGIC: The Complete Course and, for children, Big Magic for Little Hands. He consulted on illusions for Game of Thrones and helped the US Postal Service with their "Art of Magic" postage stamps. Joshua has performed on The Tonight Show with Jimmy Fallon,The Late Show with James Corden, and he fooled Penn & Teller on their hit show, Fool Us, and he starred in his own off-Broadway magic show, Six Impossible Things.