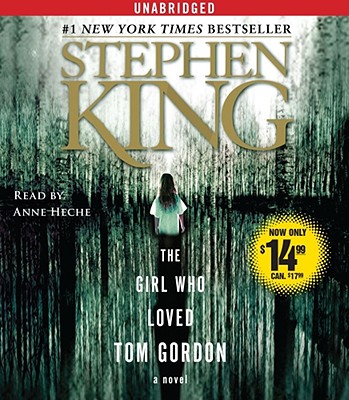 The acclaimed #1 New York Times bestseller from Stephen King—uniquely frightening suspense about a young girl lost in the woods as night falls, with only the voice of her beloved Red Sox relief pitcher to sustain her and help her survive—maybe.

During a six-mile hike on the Maine-New Hampshire branch of the Appalachian Trail, nine-year-old Trisha McFarland quickly tires of the constant bickering between her older brother and her recently divorced mother. But when she wanders off by herself, she becomes lost in a wilderness maze full of peril and terror. As night falls, Trisha has only her ingenuity as a defense against the elements, and only her courage and faith to withstand her mounting fears. For solace she tunes her headphones to broadcasts of Boston Red Sox baseball games and follows the gritty performances of her hero, relief pitcher Tom Gordon. And when the reception begins to fade, Trisha imagines that Tom Gordon is with her—the protector from an enemy who may or may not be imagined…one who is watching her, waiting for her in the dense, dark woods…

Stephen King is the author of more than sixty books, all of them worldwide bestsellers. His recent work includes If It Bleeds, The Institute, Elevation, The Outsider, Sleeping Beauties (cowritten with his son Owen King), and the Bill Hodges trilogy: End of Watch, Finders Keepers, and Mr. Mercedes (an Edgar Award winner for Best Novel and a television series streaming on Peacock). His novel 11/22/63 was named a top ten book of 2011 by The New York Times Book Review and won the Los Angeles Times Book Prize for Mystery/Thriller. His epic works The Dark Tower, It, Pet Sematary, and Doctor Sleep are the basis for major motion pictures, with It now the highest-grossing horror film of all time. He is the recipient of the 2020 Audio Publishers Association Lifetime Achievement Award, the 2018 PEN America Literary Service Award, the 2014 National Medal of Arts, and the 2003 National Book Foundation Medal for Distinguished Contribution to American Letters. He lives in Bangor, Maine, with his wife, novelist Tabitha King.

Anne Heche stars in the films Psycho, Six Days Seven Nights, Return to Paradise, Wag the Dog, I Know What You Did Last Summer, Donnie Brasco, Walking and Talking, and The Juror. Her television appearances include Subway Stories, Kingfish: A Story of Huey P. Long, Ellen, Murphy Brown, and Another World.


USA Today A delightful read, a literary walk in the woods, and not just for baseball fans.


The Wall Street Journal Impressive...A wonderful story of courage, faith, and hope. It is eminently engaging and difficult to put down.


New York Daily News A fast, scary read...King blasts a homer...[He] expertly stirs the major ingredients of the American psyche -- our spirituality, fierce love of children, passion for baseball, and collective fear of the bad thing we know lurks on the periphery of life.


Entertainment Weekly Plenty of thrills...[King's] an elegant writer and a master of pacing.